in World News
Reading Time: 7 mins read
A A
0 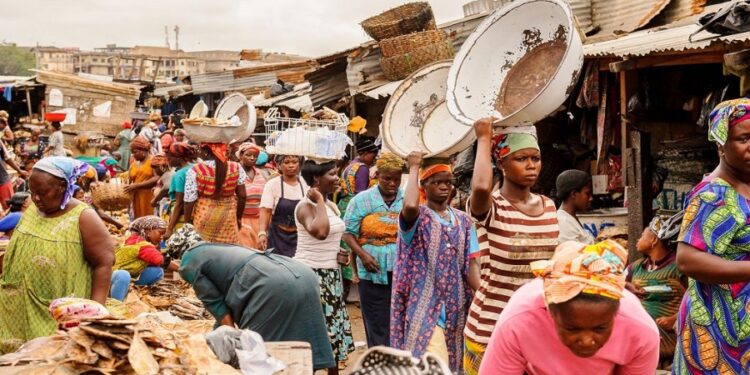 The Federal Government, yesterday, admitted to Nigeria’s status as the poverty capital of the world, when it disclosed that 133 million of its citizens are currently living in poverty.

Recall that in 2016, World Bank in its survey rated Nigeria the poverty capital of the world, displacing India from the infamous apex. The bank stated that four in every 10 Nigerians live below the poverty line of $1.9 per day, while the number of poor people in India was pegged at 269.8 million, 21.9 per cent of the population.

In its latest National Multidimensional Poverty Index Report unveiled yesterday, NBS said 63 per cent of Nigerians are poor due to a lack of access to health, education and living standards, alongside unemployment and shocks.

President Buhari said the index was adopted because it provides ways poverty could be identified and addressed with government policies.

According to the Statistician-General at NBS, Semiu Adeniran, it is the first time NBS will conduct a standard multidimensional poverty survey in Nigeria.

The report said: “Over half of the population of Nigeria are multidimensionally poor and cook with dung, wood or charcoal, rather than cleaner energy. High deprivations are also apparent nationally in sanitation, time to healthcare, food insecurity and housing.

The United Nations Resident and Humanitarian Coordinator in Nigeria, Matthias Schmale, who revealed the findings from the report said that 63 per cent of Nigerians being multidimensionally poor means that they are being derived in more than one dimension of the four measured.

A breakdown of the results showed that of the 133 million poor Nigerians, 65 per cent (86 million people) live in the North, while 35 per cent, about 47 million, live in the South.

The result also showed that poverty levels across states vary significantly, with the incidence of multidimensional poverty ranging from a low of 27 per cent in Ondo to a high of 91 per cent in Sokoto.

This is despite various intervention programmes of government. The Federal Government had, on Wednesday, through the National Social Safety-Nets Coordinating Office (NASSCO), claimed to have disbursed about $700 million from the repatriated Abacha looted funds to over 1.9 million poor and vulnerable households across the country in the last six years.

He stated that the current register of the beneficiaries of conditional cash transfer has 1,940,000 households and with the ongoing enrolment, it is hoped that the target beneficiaries may reach two million by the end of December 2022.

President Buhari yesterday restated his administration’s resolve to lift 100 million Nigerians out of poverty, insisting that no one will be left behind.

He said his administration recognises the importance of data and promised that government will utilise the MPI result in the formulation of policies going forward.

Earlier in his speech, Minister of State for Budget and National Planning, Prince Clem Agba, said the good thing about the MPI is that it gives a clearer picture of the state of poverty in the country.

Pondering why the country’s poverty narrative has not changed in spite of the huge government funding, he said: “We are conducting a sub-national MPI survey across the 109 senatorial districts, to investigate at granular level, why there is a disconnect between available social welfare opportunities and its uptake; identify which sector, state, senatorial district and groups of persons with poverty incidences, and then use these data to nudge for behavioural changes that will lead to increase in uptake, influence design and implementation of projects.

“For instance, in Ondo, educational and housing-related deprivations contribute more to multidimensional poverty than in Lagos, where food security, unemployment and shocks contribute to poverty.

“So, using the MPI beyond measurements, but as a policy, allows government to tailor interventions according to the deprivation profiles of each state, making them more efficient to result in greater impact.”

This is as about 25.3 million Nigerians across 26 states and the Federal Capital Territory (FCT) are projected to face acute food and nutrition insecurity between June and August 2023. States with the highest rate include Borno with 1.4 million people, Yobe with 1.3 million people and Adamawa with one million people.

In the projected period, food consumption is expected to slightly worsen due to possible reduction in household and market stocks and attendant rise in food prices.

According to the 2022 October Preliminary Food Security and Nutrition Analysis results released by the Federal Ministry of Agriculture and Rural Development, about 17 million people, including Internally Displaced Persons (IDPs) and returnees in 26 states are expected to be in the third phase of the crisis or even worse through October to December 2022.

Also, UNICEF has raised the alarm that an estimated 14.7 million children under the age of five are currently under the threat of severe malnutrition. The Fund said that a good number of these children may become wasted if urgent measures were not taken to arrest the situation.

UNICEF Chief of Nutrition in Nigeria, Nemat Hajeebhoy, made this known, yesterday, in Lagos during a media roundtable on Dialogues on Nutrition, organised by the National Council on Nutrition (NCN) and other stakeholders.

She said malnutrition is a direct or underlying cause of 45 per cent of all deaths of under-five children. Nigeria has the second highest burden of stunted children in the world, with a national prevalence rate of 33.1 per cent of children under five.

An estimated two million children in Nigeria suffer from severe acute malnutrition (SAM), but only two out of every 10 children affected are currently reached with treatment.

She added that the recent massive flooding, which led to the destruction of farms and agricultural products across states as well as inflation are bound to worsen the nation’s food security and increase malnutrition in 2023.

According to her, food prices has risen by 23 per cent in the last one year, making it difficult for families to provide nutritious meals for their household. She said one in three household cannot afford the lowest cost nutritious diet in the country.

She explained that only 34 per cent of households in Nigeria could afford the lowest cost diet estimated at N1,687 household per day.

Hajeebhoy further hinted that Nigeria still ranked number one in Africa and second in the world in terms of number of children malnourished, adding that the situation is threatening the survival, growth and development of children.

MEANWHILE, the Peoples Democratic Party (PDP) has said the NBS report that 63 per cent of Nigerians have fallen below poverty level, is a confirmation that the All Progressives Congress (APC)-led administration lacked the capacity and competence to deliver good governance.

Responding, the PDP Presidential Campaign Council (PCC) said the rising poverty in Nigeria is indicative of the failure of the Federal Government to build the economy.

Director of Strategic Communication, Dele Momodu, said APC couldn’t have done well because it never had the wherewithal.

In another reaction by Phrank Shuaibu, the Special Assistant, Public Communication to the presidential candidate, Atiku Abubakar, he said the report about rising poverty level in Nigeria calls for concern, “more so that in President Buhari’s Nigeria, there have been no convincing measures taken to indicate that anything concrete is being done about it.”

He lamented that “included in this troubling reality is that over 23 million youths, mostly educated and potentially productive, are unemployed.”

According to Shuaibu, “this development portends only one thing: a threat to the security and stability of the Nigerian nation.

“Although the administration claims to be empowering potential investors, big and small, so as to improve people’s lives, records show that 54.7 per cent of Nigerians are financially excluded due to low level bank penetration in the country, and that beside the 916 Microfinance Banks, the 24 ‘big banks’ have only a little over 6,000 branches, mostly concentrated in a few urban centres.”

He said what made matters worse for the APC administration was that the social safety net scheme introduced in 2016 to tackle poverty and hunger has not made any significant impact owing to poor implementation, corruption allegation and politicisation.

“It is for the purpose of departing from Buhari’s legacy of poverty that Atiku’s policy document code-named Unity-SEED, which stands for Unity, Security, Economy, Education and Devolution of power to states and local governments lays emphasis on promoting diversification and linkages between agriculture, industry and micro and small enterprises.”

Upon turning 30, Zo Kravitz had dozens of tattoos removed