A Hong Kong police officer fired a gunshot during protests on Sunday, the first time a live round has been used since demonstrations broke out in June.

Images show several other officers also pointed guns at protesters who were chasing them with sticks and poles.

In another first, police deployed water cannon against protesters earlier in the day.

The protests began in the city’s Tsuen Wan district and have since spread to the district of Tsim Sha Tsui.

Demonstrations were sparked by an extradition bill but have since morphed into broader anti-government protests, and developments on Sunday mark a serious escalation in the unrest.

Police told local media that the gunshot was fired as a warning to protesters, and that several officers had been taken to hospital as a result of the clashes.

But police Superintendent Leung Kwok-wing did not say where the shot was aimed.

During the melee, one older man was seen on his knees pleading with police not to shoot.

Before the scuffle, black-clad protesters had thrown projectiles at police, including bricks and petrol bombs.

Images on social media show the vehicles being driven through the streets of Tsuen Wan, where a group of demonstrators had set up roadblocks and dug up bricks from the pavement. 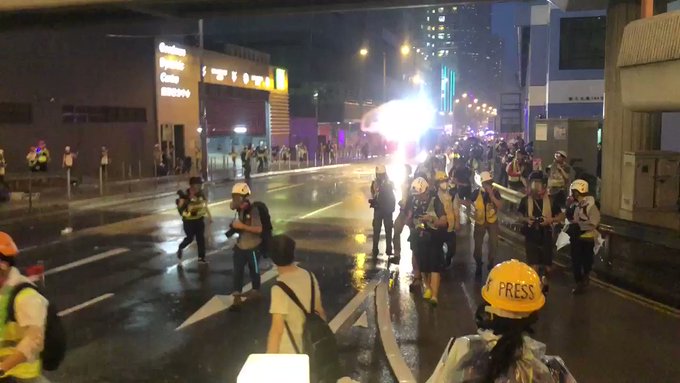 The vehicles are equipped with surveillance cameras and multiple water-cannon nozzles, and police had said they would only be used in the event of a “large-scale public disturbance”.

Earlier this month, human rights group Amnesty International warned that the cannons could cause serious injuries and lead to further tensions.

There was another, more peaceful rally on Sunday comprised of a few hundred people, some of them family members of the police, who called for a political solution to the crisis.

Activists have criticised the police for being heavy-handed during the pro-democracy rallies.

Several people were hospitalised on Saturday after violent clashes.

The latest round of violence comes after an uneasy peace that lasted a little more than a week.

The city’s MTR metro service has been criticised for closing stations near major demonstration areas for the past two days. The MTR has been attacked in mainland media, with accusations that it has become an “exclusive” transport service for protesters.

On Saturday, a senior Hong Kong official said the mainland’s military could intervene during any civil unrest.

Maria Tam Wai-chu, deputy director of the Hong Kong SAR Basic Law Committee, told a seminar in southern China: “The soldiers stationed in Hong Kong are not straw men meant to just stay in the garrison, they are an important part of the ‘one country, two systems'”.

A new level of determination

For the second day this weekend an industrial neighbourhood in Hong Kong became a battleground. Parts of Tsuen Wan are known for triad gangs so tensions were high to begin with.

But as a thick fog of tear gas engulfed a major street, it became clear that the brief peaceful lull Hong Kong had enjoyed last week was well and truly gone.

The hardline group of protesters came ready-armed with bricks, petrol bombs and metal rods. And the moderate protesters egged them on from the sidelines, shouting “corrupt police” and calling them “piles of rubbish”.

Ordinary residents and spectators were red-eyed from the tear gas and hunching low as they crossed the overhead bridges. This weekend has been a return to the familiar scenes between the police and protesters, but with what seems like a new level of determination from the protesters.

Why are there protests in Hong Kong?

They were sparked by a now-suspended extradition bill that would have allowed Hong Kong to send criminal suspects to China for trial, but they have grown into a broader movement calling for democratic reform in the territory and an investigation into alleged police brutality against protesters.

Last Sunday, about 1.7 million people attended a pro-democracy rally in central Hong Kong, according to organisers. Police put the figure much lower, at 128,000, counting only those at an officially sanctioned rally in the city’s Victoria Park.

There have been previous protests at Hong Kong International Airport as well as tourist spots in the city.

3 April: Hong Kong’s government introduces legislation which would mean residents suspected of a crime could be extradited to China to face trial for the first time

9 June: An estimated one million people march to the government headquarters to show their opposition to the bill

12 June: Police fire tear gas and rubber bullets at the demonstrators for the first time

16 June: An estimated two million people take to the streets demanding Hong Kong leader Carrie Lam completely withdraw the bill. She had promised to indefinitely delay it the day before

12 August: Protesters gather at the airport. Police admit to deploying disguised officers during the unrest the day before