This is what happens when you suggest that the absence of Aymeric Laporte for the next five months will cost them dearly. They come back the next week and wipe you off the face of the earth.

Beaten by Norwich City last weekend and coming into this match five points behind Jurgen Klopp’s side after five games, City tore mercilessly into Watford at The Etihad and came within a few inches of equalling the record Premier League victory, Manchester United’s 9-0 demolition of Ipswich Town in 1995. No wonder the Watford manager, Quique Sanchez Flores, looked like a mourner at a funeral as he sat on the bench all in black. 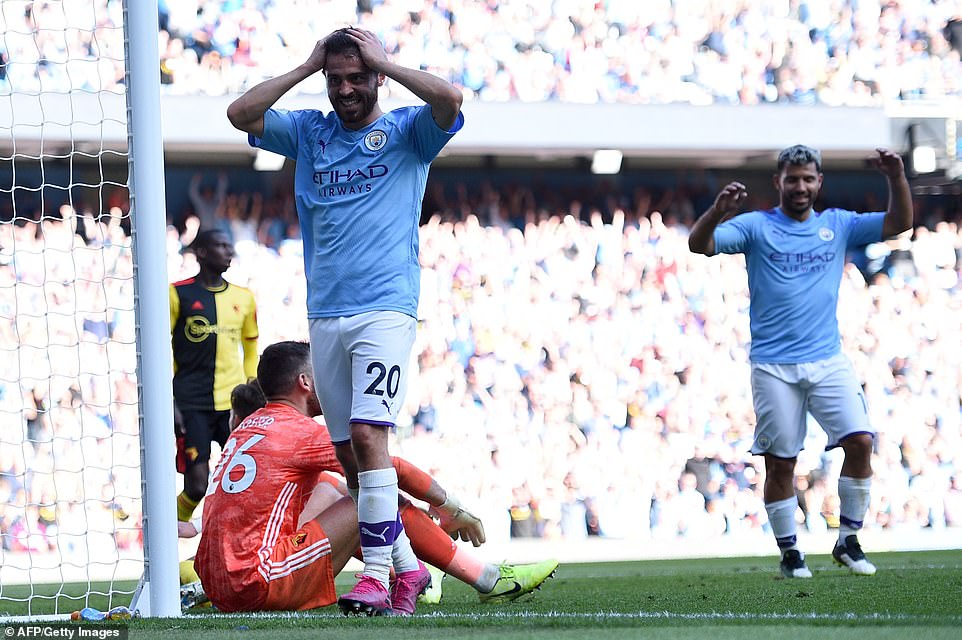 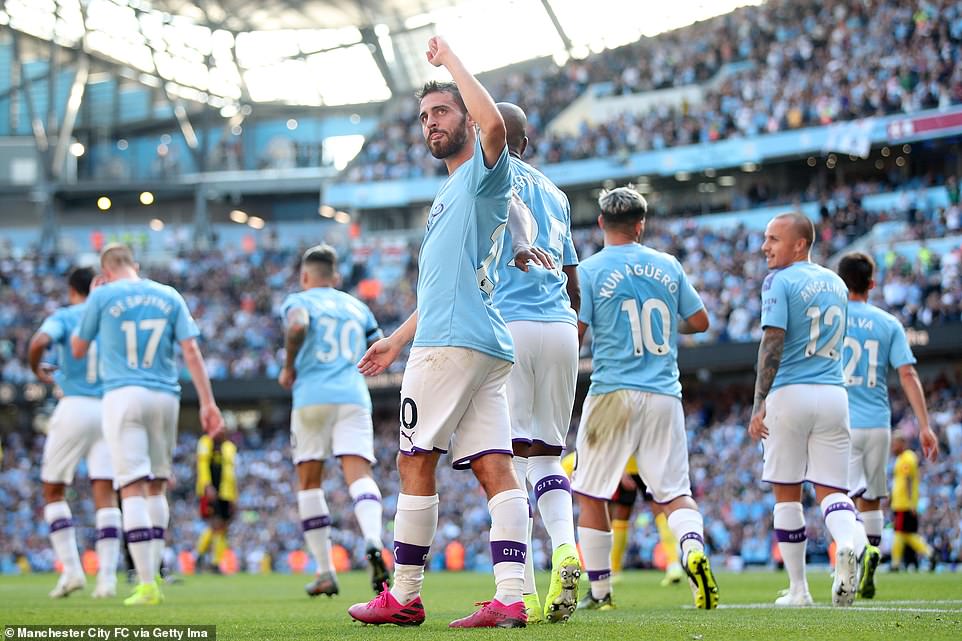 De Bruyne was magnificent. Hampered by injuries last season, this was him in his pomp again. In this form, he is the best player in the league. He made four assists and scored the eighth and best goal of the lot, an unstoppable drive six minutes from time. David Silva was untouchable, too. And as for City’s crisis at the back, Fernandinho looked unflappable. Not that he was put to the test much.

Amidst it all, spare a thought for Watford’s Guadaloupe midfielder Dimitri Foulquier, who endured the Premier League debut from Hell. He had nine touches and watched his team concede five goals in the first 17 minutes before he was substituted in the 34thminute. As he wandered to the touchline, he looked like he had seen a ghost.

City could have had more but not surprisingly, they spent long spells of the game treating the contest like a practice match, searching for urgency. City had destroyed Watford 6-0 in the FA Cup Final in May and now they went two better. They became only the seventh team in Premier League history to score 8 or more in a game. 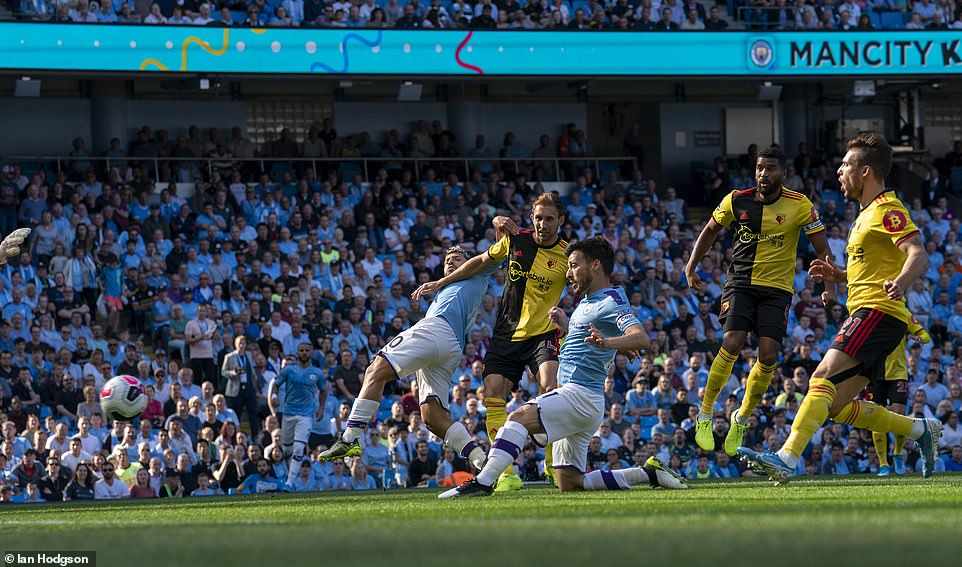 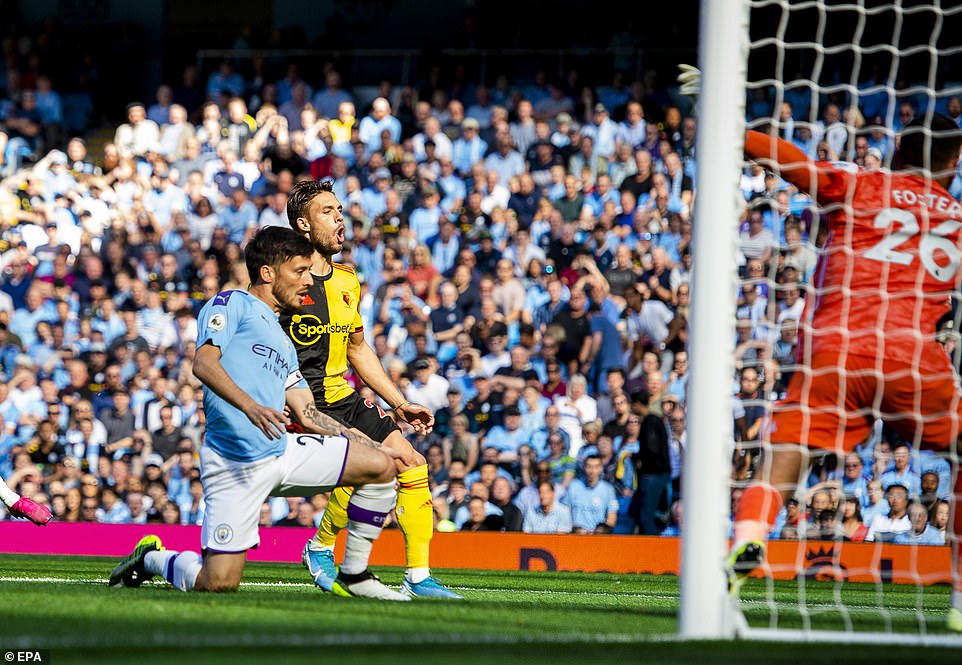 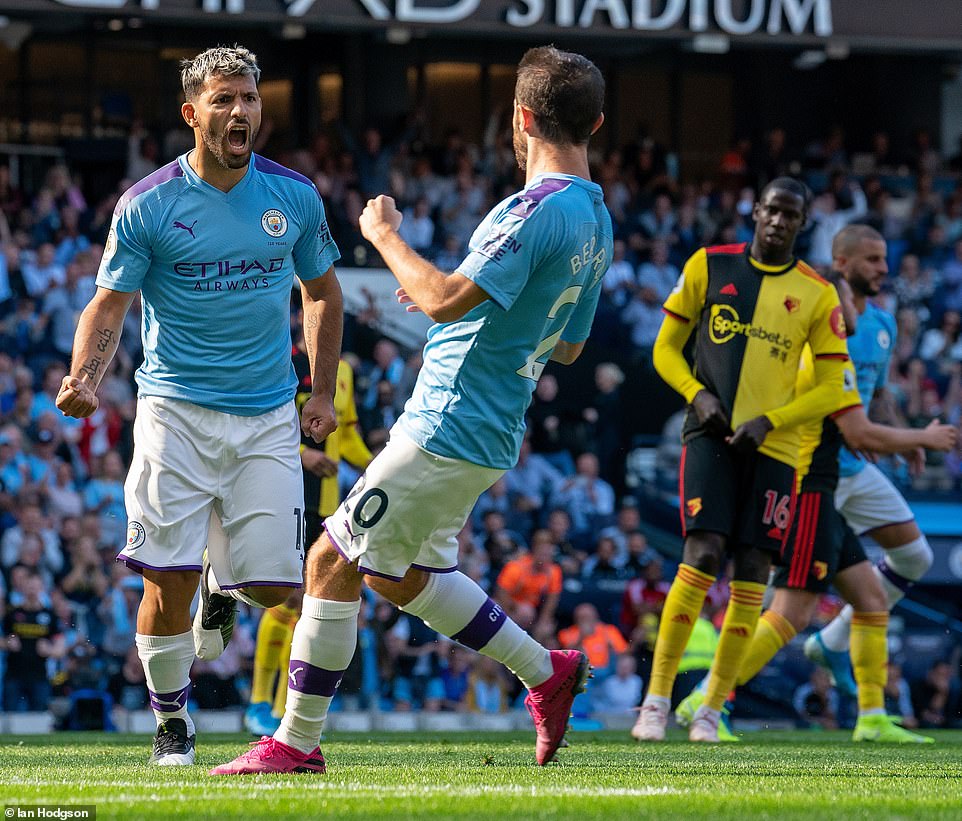 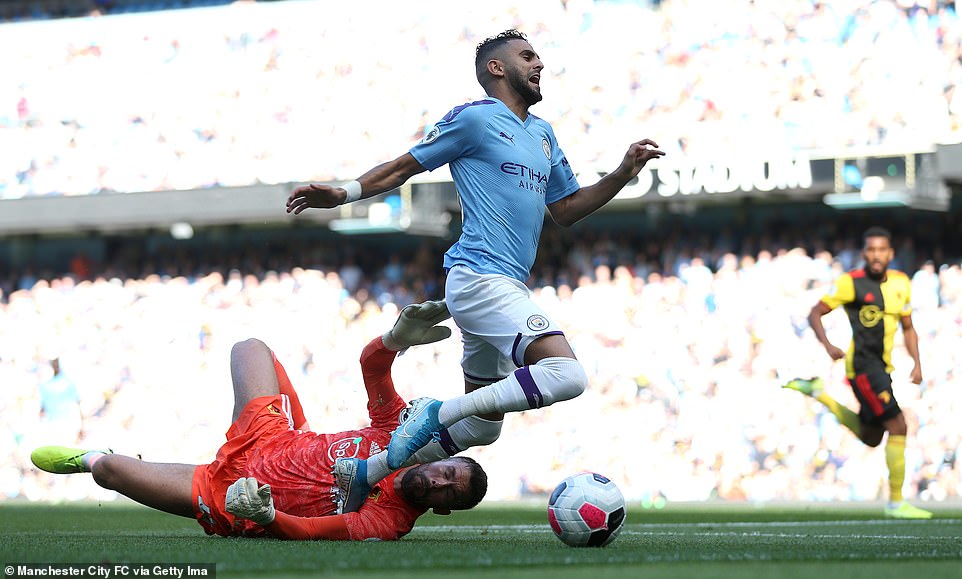 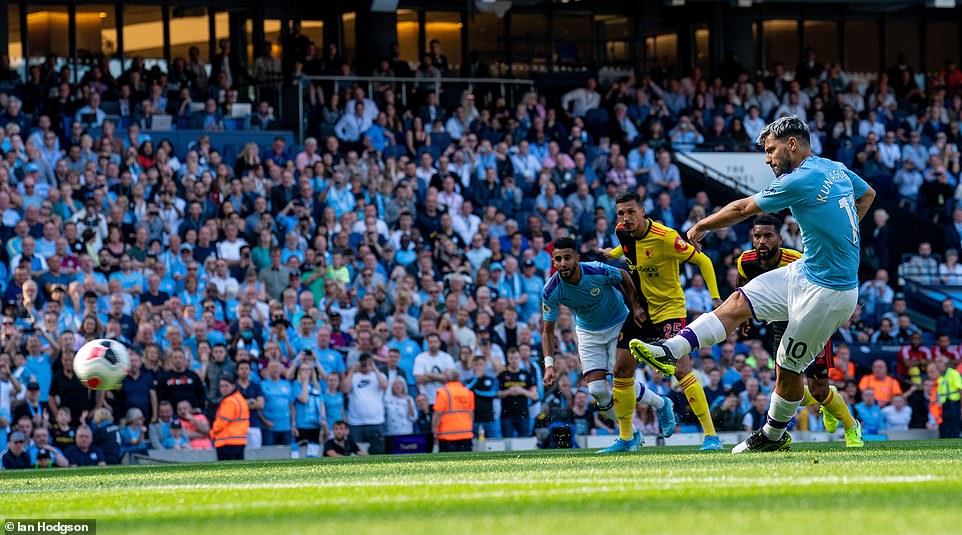 David Silva had led City out on to the pitch carrying his son, Mateo, in his arms. He had barely had time to put him down when he opened the scoring. De Bruyne started the move, feeding the ball to Walker to right. When it was worked back to him, the Belgium midfielder swung in a delicious cross and Silva sidefooted it in from a few yards out.

De Bruyne was playing magisterially, running the game from the centre of midfield. Watford could not get anywhere near him. After six minutes, he skipped away from a tackle in the centre circle, galloped forward and played a clever through ball into the path of Riyad Mahrez.

Mahrez poked it away from the grasp of Ben Foster, who brought him down even though the ball was heading straight into touch. Sergio Aguero dispatched the penalty nervelessly. It was the 100thleague goal at the Etihad, another landmark in his astonishing scoring record.

Five minutes later, City were further ahead. Mahrez set off on a brilliant run from deep in the Watford half and evaded two challenges before Abdoulaye Doucoure chopped him down on the edge of the area. Mahrez took the free kick himself. It might have been going in anyway but when it hit Tom Cleverley in the face and ricocheted away in the opposite direction, Foster had no chance. 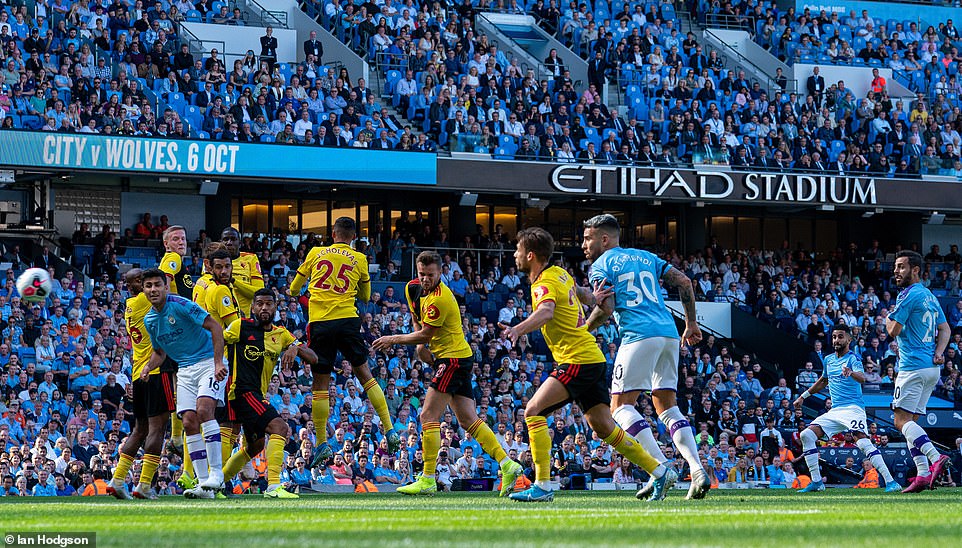 After winning the penalty, Mahrez (right, No 26) then scored with a set-piece of his own as his free-kick was deflected in 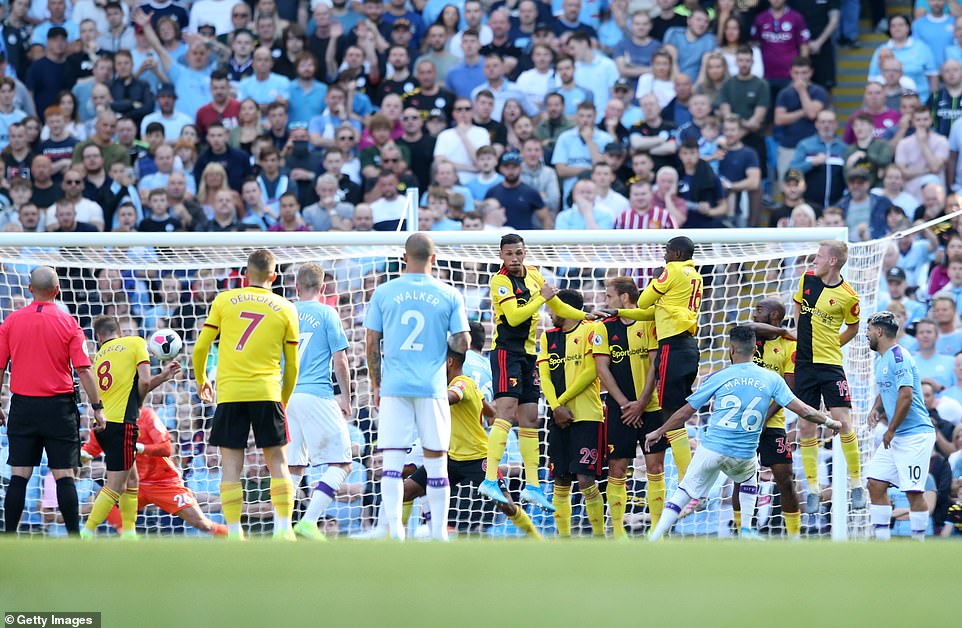 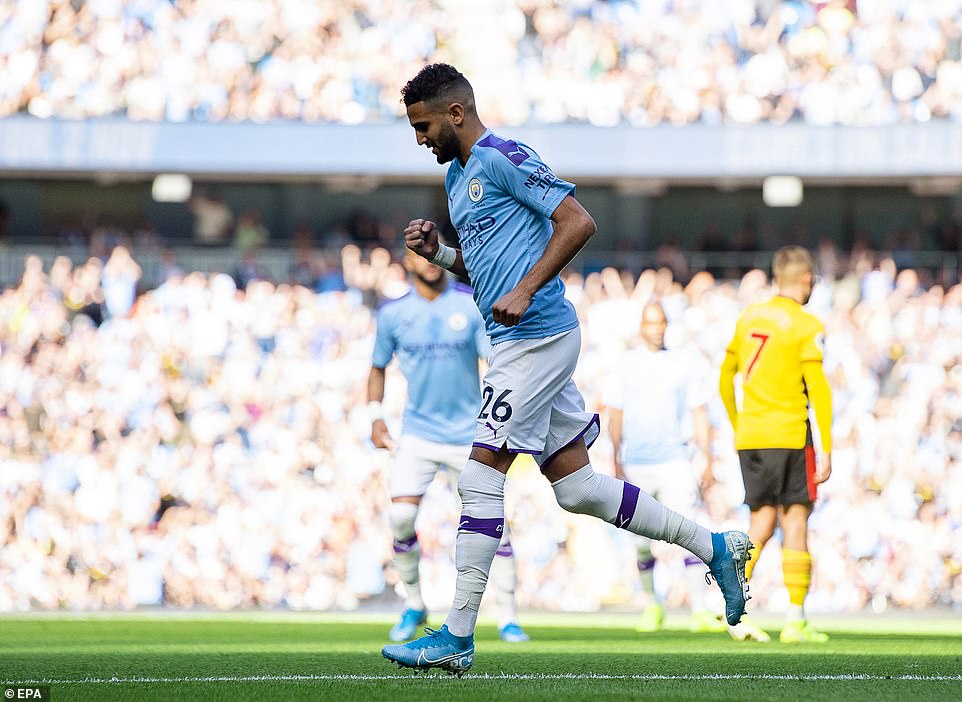 Next, City scored from a set-piece. De Bruyne delivered an outswinger from the right, Nicolas Otamendi rose above Adrian Mariappa and flicked it on. A chasm opened in the middle of the Watford area and Bernardo Silva danced into it before stooping to head the ball past Foster.

City made it to five faster than any Premier League team ever has before when a piece of quick thinking undid Watford again after 17 minutes. As David Silva stood over a free kick, Aguero spun away from his marker, Silva found him with the perfect pass and Aguero drilled the ball across the area for Otamendi to slide it in at the back post.

Then, mercifully, there was a hiatus. It is worth mentioning that amid the carnage, Watford did fashion a chance of their own after four minutes when Deulofeu jinked past a clumsy challenge from Otamendi and chipped the ball goalwards only for Ederson to push it wide with his finger tips. It was just about the only moment of relief in a long afternoon for the visitors.

City’s best move of the game, ironically, did not lead to a goal. A minute before half time, Rodri spread a magnificent cross-field ball to Bernardo Silva on the right hand touchline. He killed it with his first touch and laid it back to De Bruyne. 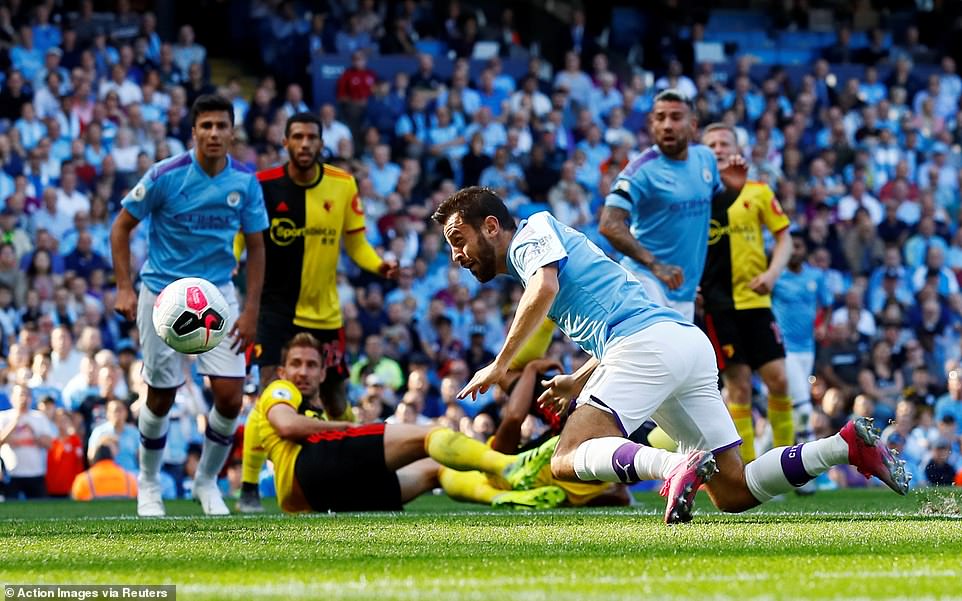 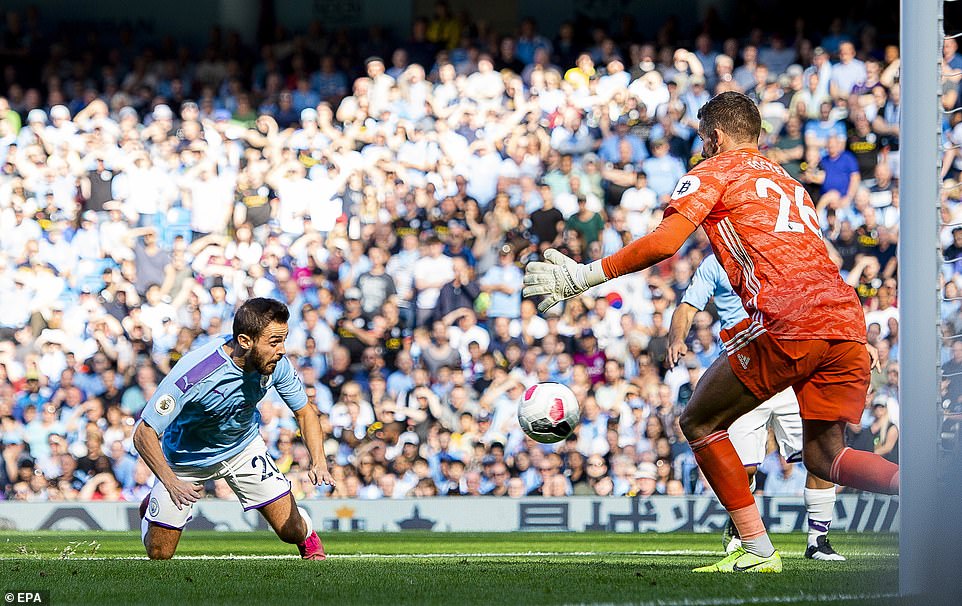 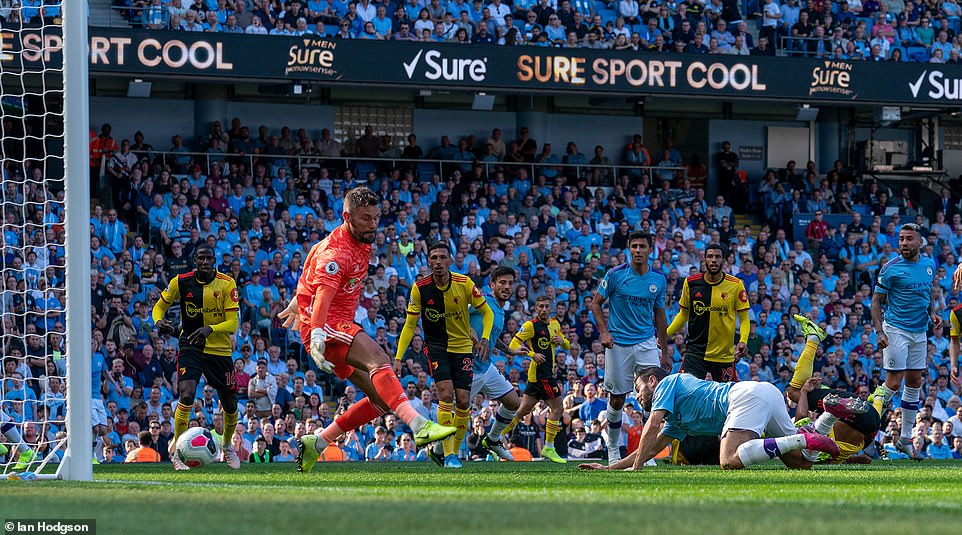 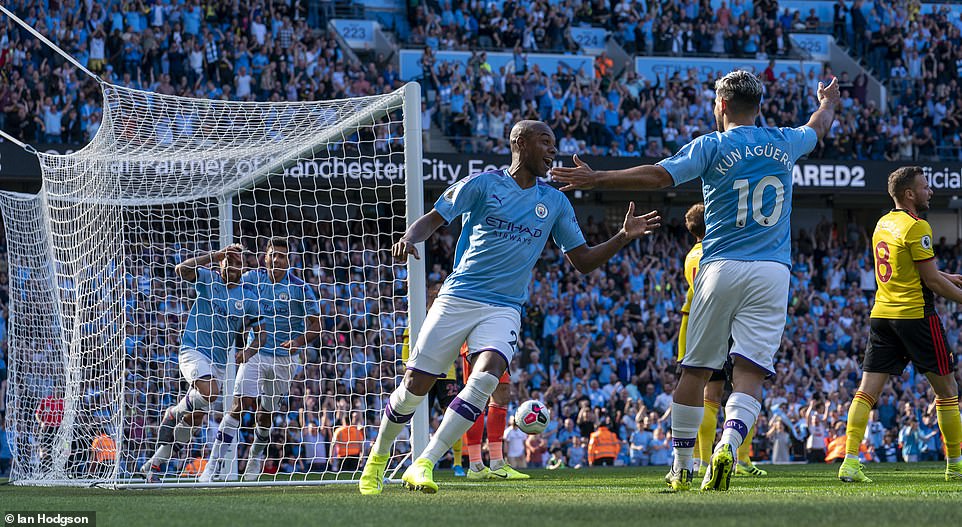 Aguero celebrates setting up Nicolas Otamendi (left, inside the net) who tapped in City’s fifth goal after just 18 minutes 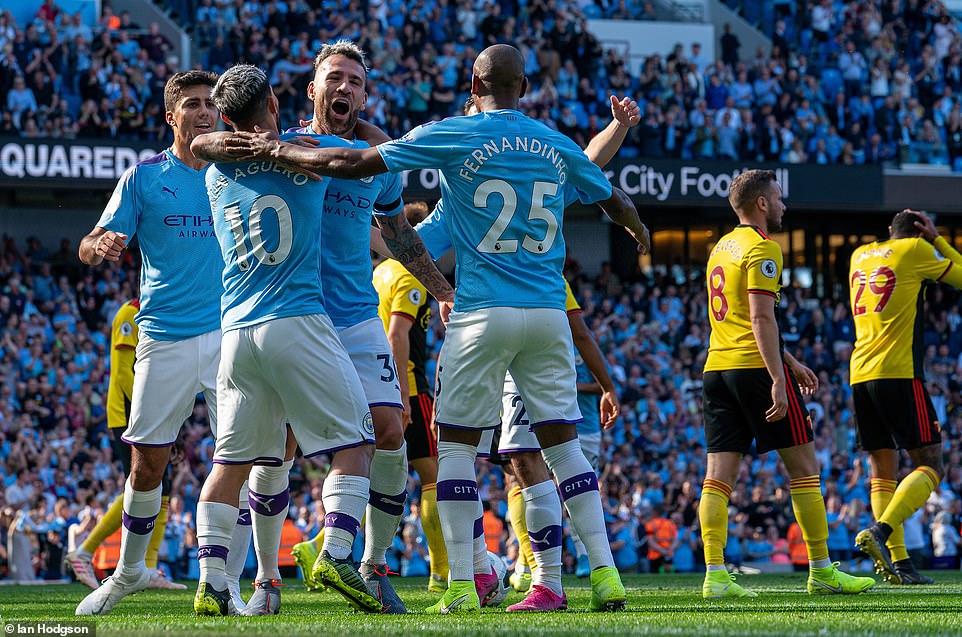 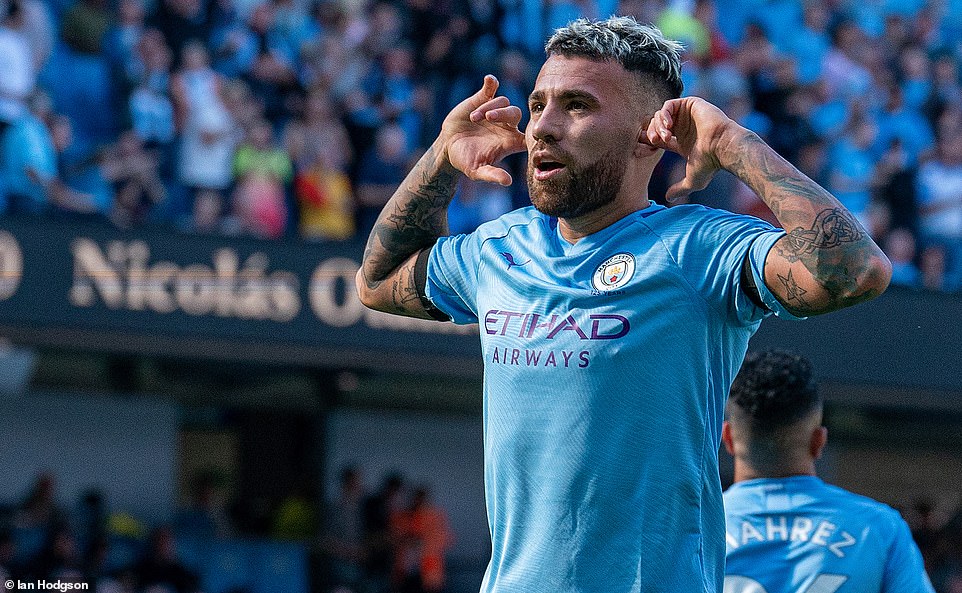 De Bruyne crossed it first time to the back post where Aguero rose to power in a header. It looked like a certain goal but somehow Foster clawed it out. On another day, it was the kind of save that might be mentioned in dispatches as a contender for save of the season. Not today, though. Today, it drowned in the glut of goals.

Two minutes after the break, City resumed scoring. Given a burst of new energy by replacement left back Angelino, they profited from some ragged Watford defending.

Will Hughes headed an attempted clearance straight to David Silva who somehow squeezed the ball through to Bernardo Silva. He eased past one defender, let the ball bounce and then hooked it past Foster. It was the 11thtime City had scored six or more goals in the post-Sir Alex Ferguson era. 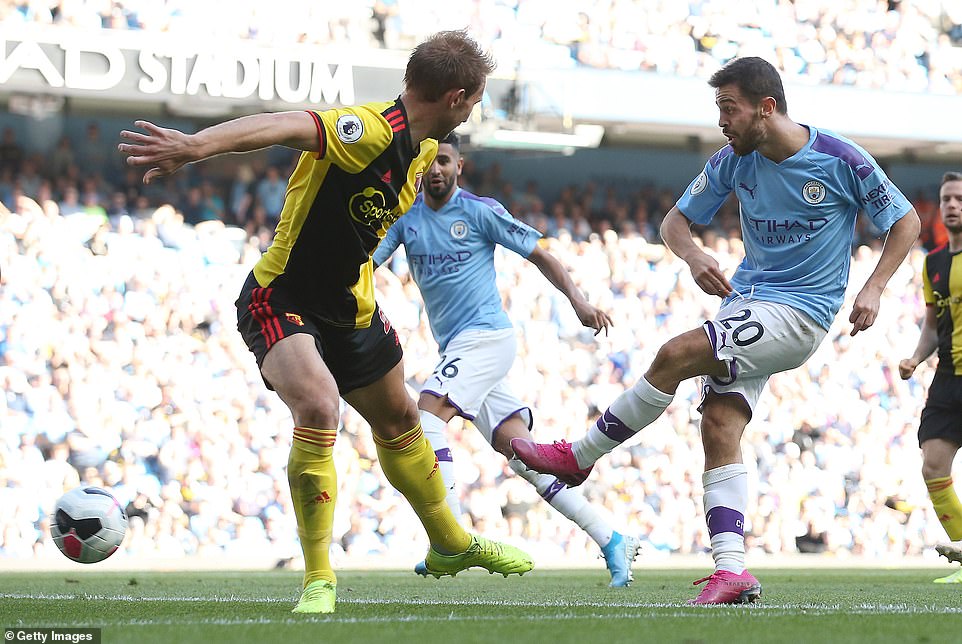 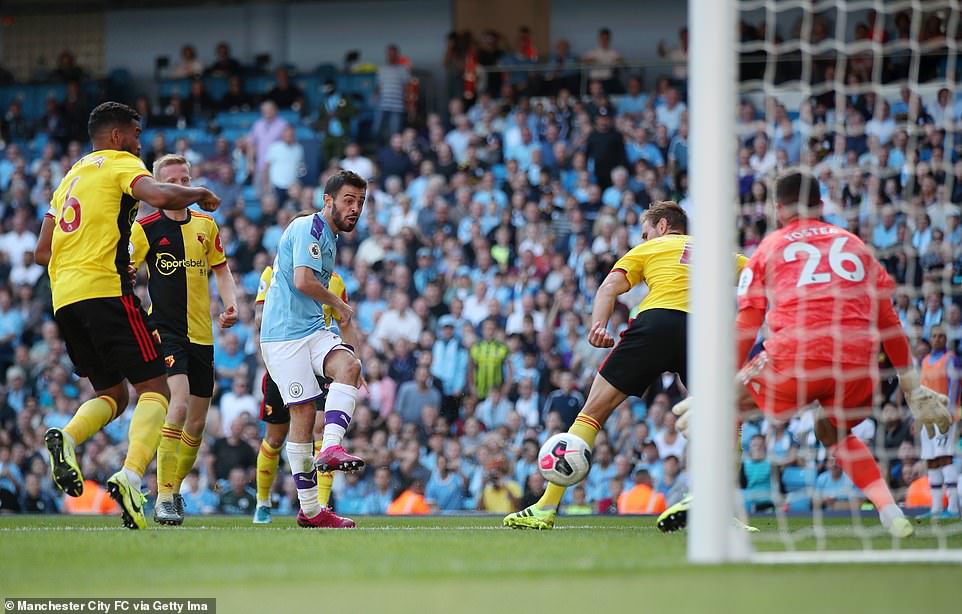 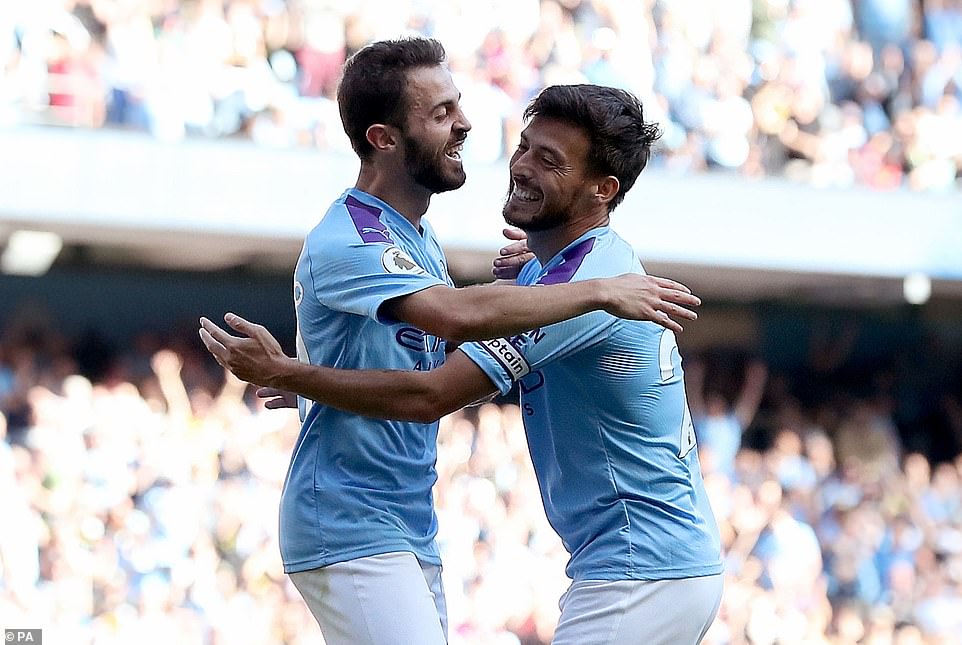 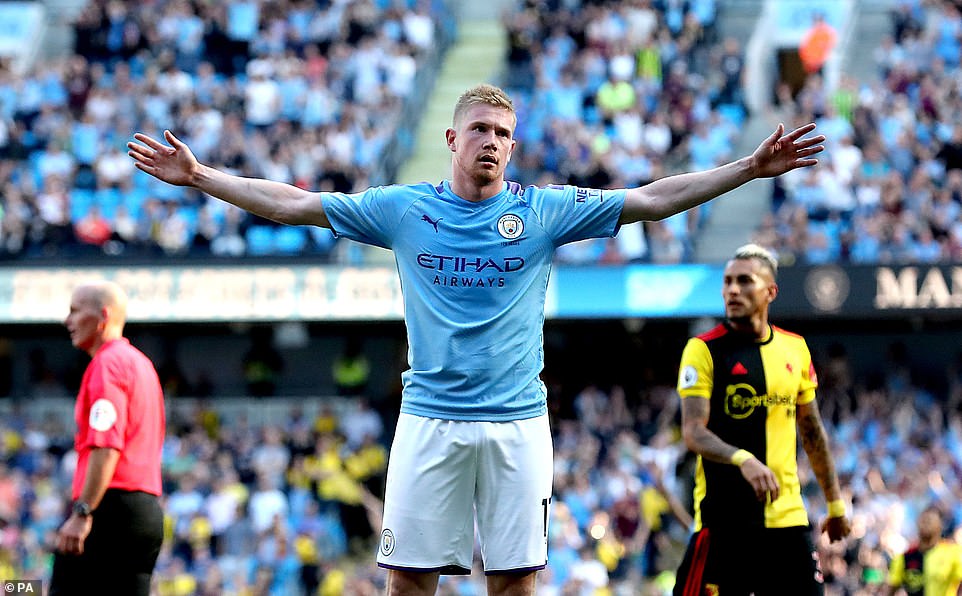 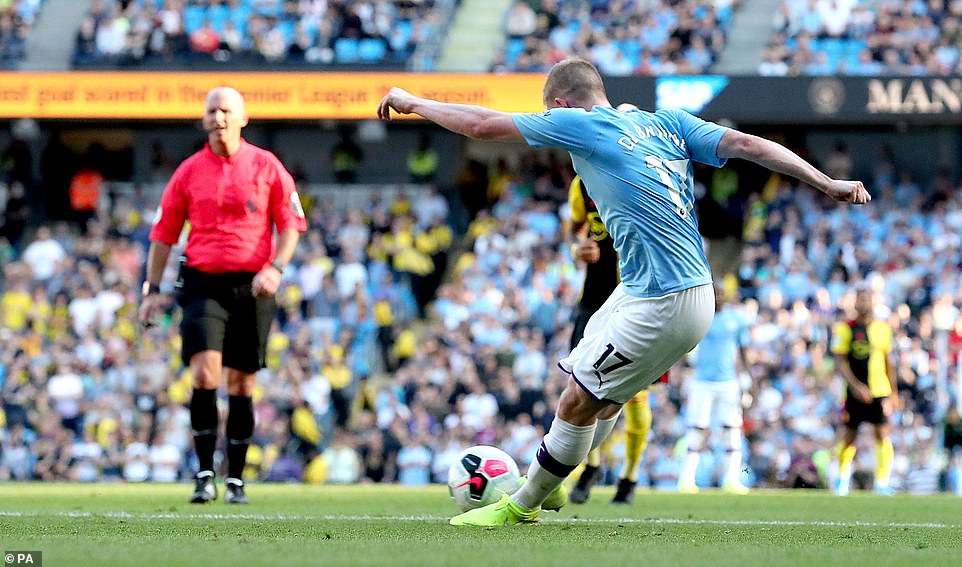 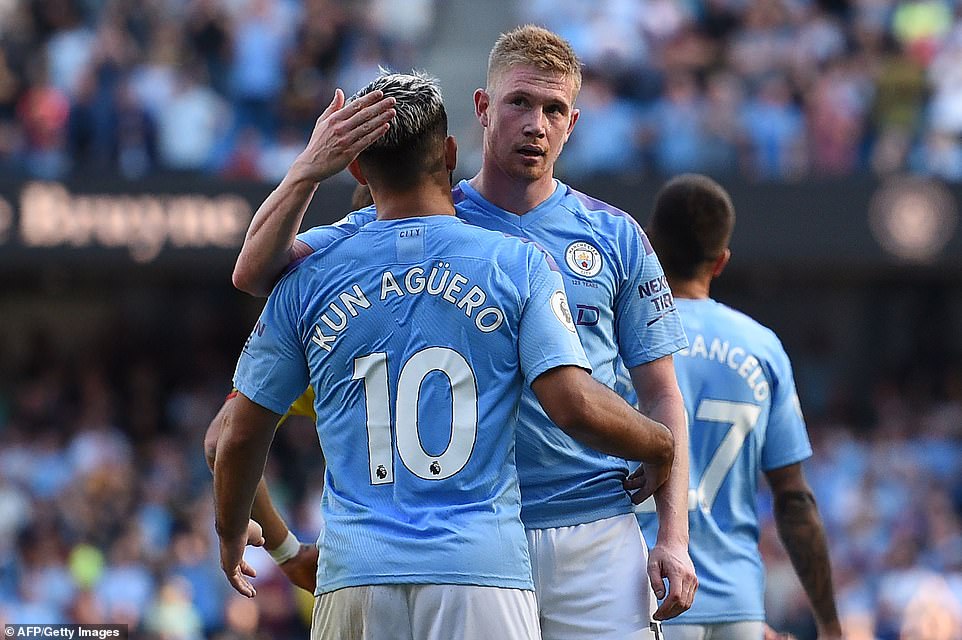 Bernardo Silva miskicked but the ball fell kindly for him and he rammed his second effort past Foster. The Portuguese forward put his head in his hands. He looked embarrassed. He wasn’t the only one starting to feel sorry for Watford.

Not De Bruyne though. Aguero missed two more good chances but there was no let up in the beauty of De Bruyne’s play. Midway through the second half, he caressed a cross with his left foot to the back post where Mahrez was waiting.

Mahrez headed it back across goal. It beat Foster but cannoned off the face of the crossbar and bounced away to safety.

De Bruyne saved the best for last. Six minutes from the end, he received the ball on the edge of the Watford box, stepped inside his marker and lashed an unstoppable rising drive past Foster into the roof of the net.

Perhaps in the end, De Bruyne took pity on those he was persecuting by sparing them the ignominy of being classed with that Ipswich side as the most hapless losers of the Premier League era. In the dying minutes, he danced through again and with only Foster to beat, he dragged the ball wide. Small mercies. 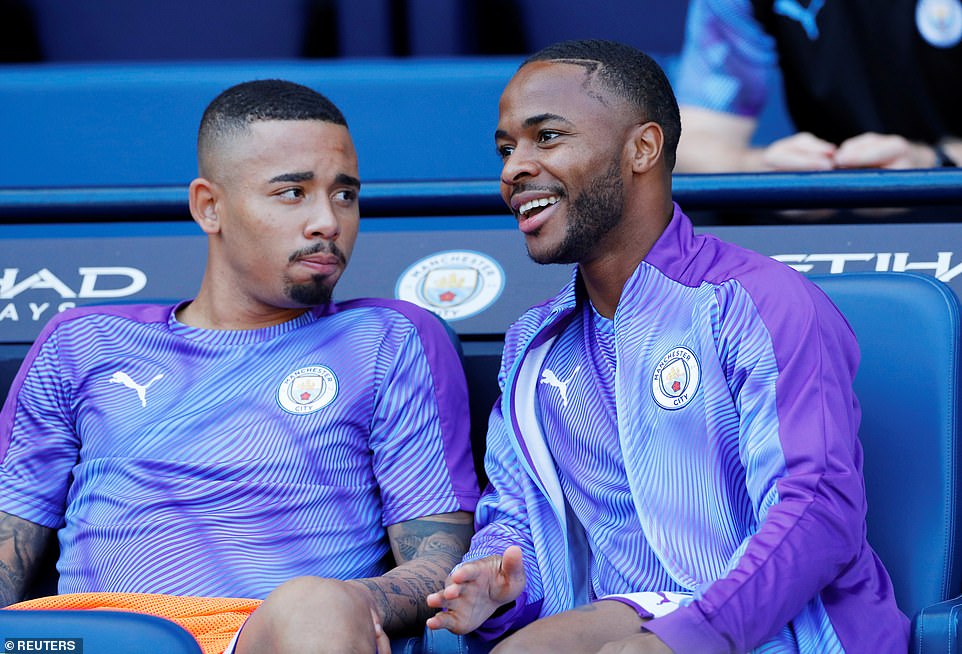 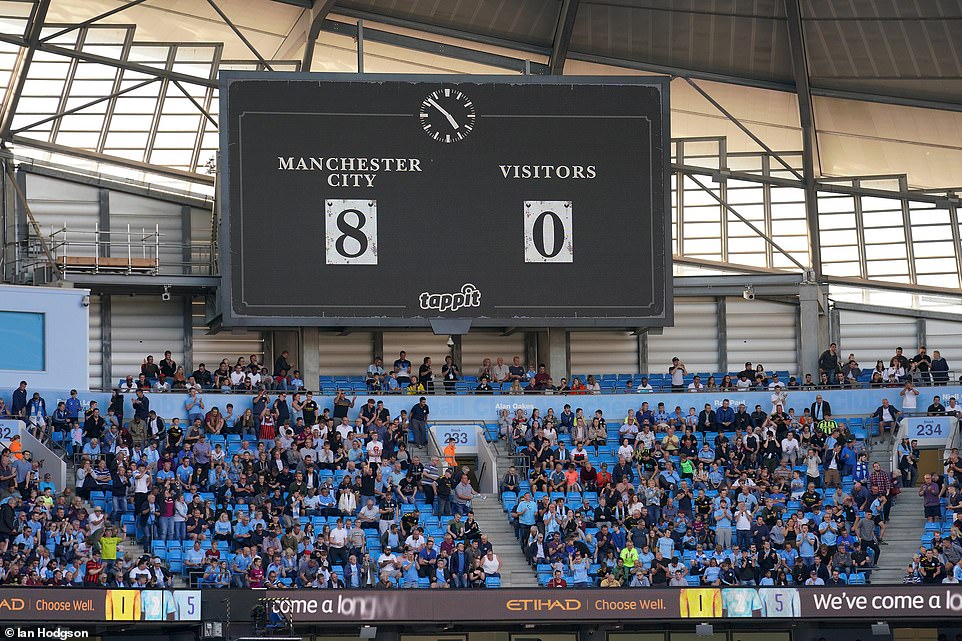 Bombs and guns factory uncovered inside popular hospital at Alajo

Nayas’ husband breaks silence after marriage to the ‘controversial’ actress