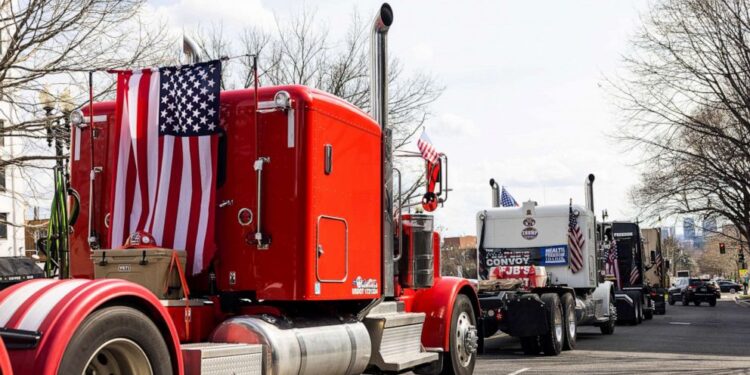 The group led by truckers known as “The People’s Convoy” announced it is leaving the Washington, D.C., area this week to make a cross-country trip back to California in an effort to protest a batch of COVID-19-related bills in California.

Co-organizer Mike Landis says the group, which includes many in vans, RVs and cars, wants to “end the tyranny that’s going on in our government.”

The group plans to leave Thursday morning, a leader told the convoy on Tuesday. A livestream showed much of the convoy leaving for Harrisburg, Pennsylvania, on Monday for a “Freedom Rally” supporting Sen. Doug Mastriano, R-Penn., who has expressed support for the convoy.

They arrived back in Hagerstown, Maryland, Monday night and planned to eventually head to California, where the convoy originated before the group’s trek across the country last month.

The California bills the convoy will protest range from employer vaccine mandates to COVID-19-related school requirements. Landis listed them one by one during Sunday’s meeting.

For three weeks, the convoy has looped around the Beltway protesting workplace vaccine mandates and other government measures meant to stop the spread of COVID-19.

Convoy leaders have been able to get some meetings with lawmakers while in the D.C. area, including Sens. Ron Johnson, R-Wis., and Ted Cruz, R-Texas.

On Sunday night, addressing a crowd that has thinned over time, Landis told the group that it is “not done here” in D.C., and said more followers would join along the way. If they don’t stop the bills, he said, younger generations would suffer.

“So what I want to know is, what do you all think about heading to California?” Landis said to cheers and honks.

Despite no legislative or executive change resulting from the convoy, Landis pushed back against the idea that the convoy is giving up.

“Sometimes in the middle of a job, you realize that something else pops up that is more important or more necessary,” Landis told the group at a meeting Monday evening.

At the Tuesday morning meeting, a convoy leader said the trip to California would take approximately eight to 10 days.

The plan to hit the road comes after a week of some internal dissent that started when many convoy members grew frustrated with circling the Beltway and wanted to go downtown, an idea that was quashed by organizers. The unrest boiled over when Landis and fellow co-organizer Brian Brase took brief leaves to return to their respective homes.

“Are we going to LA or Sacramento?” a supporter asked Landis at the Monday evening meeting.