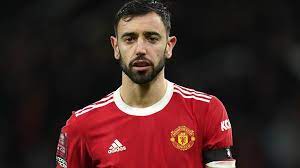 Bruno Fernandes has agreed a new contract with Manchester United that will make him one of the three highest-paid players at the club.

Paperwork to extend the midfielder’s deal to 2027 is ready and an announcement will follow. Talks started in July and a breakthrough was made two weeks ago.

Fernandes joined from Sporting in January 2020 on a five-and-a-half-year contract, with an option to extend for a further year, so the new proposal adds only one extra season but substantially increases his salary in recognition of his impact.

Although the 27-year-old’s form has dipped this season he is regarded by United as a central part of their future regardless of who takes over from Ralf Rangnick as manager this summer. Fernandes scored both Portugal goals on Tuesday as they beat North Macedonia to qualify for the World Cup.

United announced on Thursday that they would play in Bangkok and Melbourne in July on a tour during which they will face Liverpool in Thailand and Crystal Palace and Melbourne Victory in Australia.