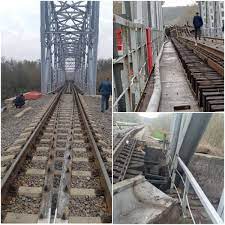 A key Russian railway bridge has been damaged in the border region with Ukraine in a potential act of sabotage – as Russia relies on its railroads to shift its attacking forces in preparation for a massive assault on eastern Ukraine.

Photographs from the bridge in Russia’s Belgorod region showed that a section of rail had been forced upward, possibly due to an explosion. The photographs, as well as news of the incident, were first published on Tuesday by the local Russian governor and local media.

“There are no casualties,” governor Vyacheslav Gladkov wrote in an online statement. “Only the railway track is destroyed … I will inform you about the reasons later.”

The incident comes as Russia has begun militarising its border regions near Ukraine by raising threat alerts, erecting military checkpoints and mobilising local townspeople in a sign that Russia’s war effort is shifting toward east Ukraine.

Ukraine has not confirmed if it stands behind the attack on the railway bridge, which commentators said would make sense as a cross-border raid meant to slow Russia’s shifting of heavy artillery and other military vehicles needed to prepare for an assault in Ukraine’s Donbas region.

Russia relies heavily on rail to move its military equipment. The bridge sits just four miles from the border on a rail line that goes south into Ukraine and lies on a supply line between Russia and the territory it holds close to the city of Izyum near the Donbas.

Ukrainian intelligence has warned that Russia may be preparing “false flag” attacks that could justify a new offensive in coming weeks.

Vladimir Putin on Tuesday said the war would continue “until its full completion and we achieve our goals”, blaming the west for forcing Russia to attack Ukraine. He also denied evidence that Russian soldiers committed war crimes in the Ukrainian town of Bucha.

Ukrainian officials said that Russia may seek to drive public opinion in support of the war by staging attacks that can then be blamed on Ukraine.

“Russian intelligence services are planning a series of terrorist attacks with bombing and compromising residential buildings, hospitals and schools in Russian settlements,” said Maj Gen Kyrylo Budanov, the head of Ukraine’s military intelligence, in a statement.

He added that Belgorod, along with cities in Crimea, could be among those cities targeted. “Trenches are actively being dug in the Belgorod and Kursk regions, there is panic about an imaginary attack of Ukrainian volunteer battalions and diversion groups,” he said.

Russia previously claimed that Ukraine had targeted a fuel dump in a helicopter raid earlier this month. Ukraine denied responsibility for that attack, with a senior official saying that “whatever happens on Russia’s territory is Russia’s responsibility”.

As Russia shifts its military toward the east, there are signs that the military is increasing controls in its border regions.

Six Russian regions on the border with Ukraine raised their terrorist threat levels on Monday, citing fears of “provocations”. Photographs showed that new vehicle checkpoints had been erected in the Kursk and Belgorod regions, with police stopping drivers and performing car searches.

In Belgorod, a Russian city that sits just 18 miles from the border, the mayor called on Tuesday for locals to join neighbourhood watch groups. “Duties … include patrolling the streets in the evening and at night, as well as helping the police to ensure law and order,” the order said, according to state media.

The Belgorod region has also banned the use of firecrackers and fireworks “so as not to frighten people with unnecessary loud sounds”, reports said.

So-called “railway rebels” in Belarus performed more than a dozen acts of sabotage during the early weeks of the war, in an effort to disrupt supply trains travelling from Belarus to Russian units stationed in northern Ukraine.

The attacks on relay switches and other infrastructure had briefly shut down major routes, including the line from Minsk to the besieged Ukrainian city of Chernihiv.

In January, Belarusian cyber-partisans opposed to Alexander Lukashenko told the Guardian that they had hacked the country’s railway system in an effort to disrupt the Russian military buildup that preceded its invasion of Ukraine.