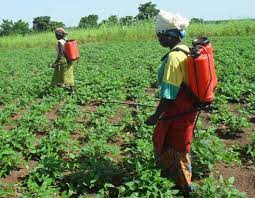 Food poisoning is becoming a major issue in Ghana, where citizens are increasingly demanding action from health officials. Various forms of food contamination have taken the lives of many and brought others to the brink of death. The experiences shared by surviving victims are not pleasant at all.

Ama Agyemang Kudom is a communications expert who lives in the capital city of Accra. She had a terrible experience with food contamination about three years ago and had to spend days in the hospital recovering.

I was going to my village for a funeral, she narrated. I bought banana along the way. By evening time, I started experiencing severe stomach pains and I was running. My brother-in-law had to take me to the hospital. For three to four days, I was completely down

She suspects the banana had been treated with chemicals to induce ripening prematurely a practice that is all too common with fruits sold on the streets of Accra. Kofi Darko, a resident of Ghana s second biggest city, Kumasi, is another victim of food poisoning who has been sharing his story.

He remembers buying fruits on the streets of Kumasi after a hard day s work because he had previously been advised to stay away from heavy food at night. Kofi says he almost lost his life that night.

I had butterflies in my tummy , he recalled. We had to rush to the hospital. After the doctor conducted tests, he said I had taken poison. They gave me activated charcoal so I can vomit everything out. They took samples to run some tests and they realized the fruits had some chemical substances.

They (the banana sellers) forced it to ripe by adding carbide that I hear they use to cause the banana to ripe immaturely. The doctor said if I hadn t been rushed to the hospital, I could have died, he added.

In April 2017, the Ghana Police Service, working with the Food and Drugs Authority, arrested two women at a market in Accra after an onlooker filmed them dipping peeled oranges they were about to sell into a bowl of colored water. The colored water turned the pale, whitish orange segments yellow, making them more attractive to potential customers.

Two years earlier, in 2015, the FDA issued a statement warning the public against consuming palm oil after a market survey discovered that 98 percent of the palm oil screened tested positive for Sudan IV dye. The dye, which is deadly when consumed by humans, is added to the palm oil to increase its redness as a way to attract more customers.

Another form of contamination is often overlooked pesticide poisoning. At Beregoro, a farming community in the Eastern Region of Ghana, farmers say they cannot grow their produce successfully without excessive use of chemicals. Let s look at lettuce for example. It takes 12 weeks to mature between planting and harvesting. But it s sprayed at least six times before harvest. These chemicals are strong, and need to be applied under strict health and safety procedures. The most important of these standards has to do with the duration between last chemical application and harvest.

As for pesticides, especially insecticides, every two weeks you have to spray, Agric Extension Agent Christian Zormelo noted in an interview. But when it is almost nine weeks, you stop the chemical usage. So that you have at least 12 to 21 days before you harvest to allow for all the residual effects to break down. But the extension officer admitted a lot of farmers in the vicinity flout these standards and end up risking the lives of their consumers.

Even some prefer spraying and then the following day, they harvest, Zormelo disclosed.

Wisdom Korkor is one such farmer. In an interview, he explained: At times, the traders who come to buy the cabbage put pressure on farmers to harvest just a day after spraying the chemicals. They get upset if we do not allow that because they have the money.

The evidence of how powerful these chemicals are lies in the way farmers react to them when they apply the pesticides without the necessary protective clothing.

When you are spraying, you will see that you will become ill, Ernest Boabeng, a vegetable farmer explained. You suffer headache, and you suffer pains and you get eye problem.

Added another farmer: It makes me unable to sleep at night. I get fever. I can t even breathe. My body itches. Then I get headache. I am unable to go to work for three days.

And in fact, in the home of rice farmer John Awuku Dziwornu, a child died as a result of the improper storage of chemicals. I lost a cousin s daughter to insecticides. The father went to the farm, came back and didn t store the remaining pesticides. So this little girl took it and drank it and died. That girl could have been a doctor or lawyer or president and I am saddened by that, he explained.

Fredrick Boampong, programs manager of Crop Life Ghana, an association of chemical sellers, said they have also observed the mishandling of pesticides and their containers in several farming communities across the country. During our program, we found that most of the farmers were using the chemical containers for keeping salt in their kitchen, he said. Some were also using it to store water. It is dangerous. With the chemical container, even if you triple rinse it, it s still hazardous.

Besides spraying too close to harvest, Ghana s farmers misuse pesticides in other ways, including over-application and using pesticides some of which contain unsafe active ingredients that are intended for cash crops, like cocoa and cotton, on food crops as well.

A report by the Northern Presbyterian Agricultural Services documents how in 2010 alone, 15 persons in Ghana s Upper East Region died from suspected pesticide poisoning, according to the Regional Directorate of Health. Most of these deaths occurred due to poor storage of pesticides, which seeped into food stocks. Meanwhile, 118 persons suffered poisoning from consuming food contaminated with pesticides.

Aaron Attefa Ampofo, an agricultural consultant, attributes the situation to the fact that a lot of these farmers are uneducated and don t understand safety instructions. We have a huge problem because between 30 to 70 percent of the farmers producing vegetables are illiterate. The production context is changing. The factors that come into play are becoming complex. With the improvement of science, agro chemicals are not the simple chemicals we used to know. So you need some minimal education or sensitization to decipher between which chemicals to use at what time, he explained.

In order to deal with the problem of food contamination by pesticides, some are calling for the adoption of crops genetically engineered to resist pests and disease, thus reducing or eliminating the need for farmers to use pesticides.

Others are pushing for a ban on the application of chemicals in food production. Dr. Samuel Atta Mills, who is a farmer and member of Parliament s Rural Development Committee, is leading the charge. We need to ban these things. Ban the importation of pesticides. We need to get to organic farming. And anybody who is going to handle this should be qualified persons. And we shouldn t be dependent so much on these things. Most of these advanced countries have banned all these weedicides. But they need to make money and so they send them to us, he alleged.

But chemical dealers, and farmers battling pest infestations, disagree, noting that organic agriculture also uses pesticides. Believe you me, we are at this stage and we can t do without chemicals, Boampong of Crop Life Ghana noted.

Joseph Opoku Gakpo is a 2016 Alliance for Science Global Leadership Fellow and a broadcast journalist in Ghana.