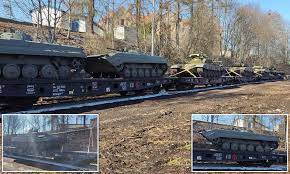 Ukraine could receive loans, grants and possibly the proceeds of seized Russian oligarch property to help pay the multibillion-euro cost of rebuilding the country after the ruinous war launched by the Kremlin, according to a leaked EU reconstruction plan.

In the plan drafted in Brussels, the European Commission states that the Ukrainian government will have to take out loans to pay for rebuilding its war-ravaged country. Non-repayable grants from EU member states would provide another tranche of the funds needed to rebuild destroyed homes, schools, roads, railways, airports and bridges.

The EU also proposes assessing the feasibility of using assets seized from sanctioned Russians and Belarusians after a proposal from the head of the European Council, Charles Michel, earlier this month. “I am absolutely convinced that this is extremely important not only to freeze assets, but also to make possible to confiscate it, to make it available for the rebuilding of the country,” he told Ukraine’s Interfax news agency.

Lawmakers in the UK and the US have also proposed seizing Russian property to aid Ukraine’s reconstruction and ease the plight of the country’s refugees.

Brussels officials have also called for the EU to borrow as a bloc on international capital markets to finance loans for Kyiv, according to the leaked report.

If agreed, it would be only the second time in its history that the EU has borrowed as a whole rather than as individual member states, after funding the landmark €750bn (£635bn) Covid recovery plan in 2020.

The idea is floated in a Ukraine relief and reconstruction plan seen by the Guardian that the commission is expected to publish on Wednesday. Figures have been left blank in the document, pending further discussions in Brussels.

The paper notes, however, that the financial needs “are expected to be substantial” and that reconstruction would take more than a decade. It also estimates that damage to physical infrastructure alone may run to more than €100bn.

To pay the bill, the commission proposes a mix of grants and cheap loans in which EU member states and non-EU countries could make contributions via the bloc’s reconstruction programme.

The US president, Joe Biden, proposed a $33bn (£27bn) aid programme for Ukraine last month, which includes more than $20bn in military spending.

The EU has provided €4.1bn in emergency loans and humanitarian aid since the start of Russia’s invasion and agreed to fund weapons and other non-lethal military assistance worth €1.5bn. This does not include the money that individual EU member states have provided.

The EU’s reconstruction plan would be jointly led by Brussels and Kyiv, according to the document. Although it does not explicitly mention Ukraine’s hopes of joining the EU, the plan would be intended to bring the aspirant member in line with EU standards, including on the rule of law, anti-corruption, energy and the climate.