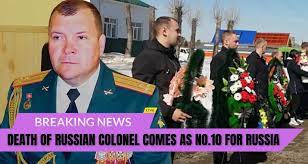 Colonel Denis Kozlov, 40 was among Russian troops who died on May 11 in a failed advance across the Donets River at Bilohorivka after being ambushed by Ukrainian troops.

He had only recently replaced Colonel Sergei Porokhnya, 45, who was killed in Ukraine on March 14.

But Kozlov has now become the commander of the 12th Separate Guards Engineers of Keningsbersko-Gorodokskaya Red Banner Brigade to die in the war with Ukraine.

The Russian colonel was guiding a pontoon ferry across the river, west of the city of Lysychansk, in the Donbas region.

But he was killed after Ukrainian forces launched missile strikes on the area.

The latest disaster for Russia has been revealed by satellite images which show the remains of two pontoon bridges drifting in the Donets river.

This is seen surrounded by the ruins of destroyed tanks and armoured vehicles.