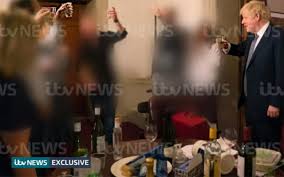 An image, leaked to ITV, shows the Prime Minister raising a glass of alcohol during an event inside No10 in November 2020. At the time it was illegal to hold indoor gatherings with those from a different household, with Britons told to stay at home during the month long second lockdown.

The picture risks reigniting Tory anger over the so-called Party-gate saga in No10 and placing renewed pressure on the Prime Minister.

Publication of the investigation was delayed in January until after a separate police probe into the claims of rule-breaking was concluded.

The police inquiry saw a total of 83 people receive at least one fixed-penalty notice for attending events over eight separate days.

Boris Johnson received just one fine, for his 56th birthday gathering in June 2020.

No10 this afternoon said the police saw the picture of Mr Johnson from November 2020, suggesting the Met did not consider it showed evidence of a rule breach.

A No10 spokeswoman said: “The Cabinet Office and the Met Police have had access to all information relevant to their investigations, including photographs.

“The Met have concluded their investigation and Sue Gray will publish her report in the coming days, at which point the Prime Minister will address Parliament in full.”

However, Labour have seized on the new pictures to accuse Mr Johnson of lying to the British public.

The Opposition highlighted the fact the Prime Minister told MPs in the House of Commons last December that there was no illegal gathering inside Downing Street on the date the picture is thought to have been captured.

Asked by Labour’s Catherine West if there was a party in Downing Street on November 13, Mr Johnson replied: “No, but I’m sure whatever happened, the guidance was followed and the rules were followed at all times.”

The Seven Factors Driving High Cost Of Living In Ghana