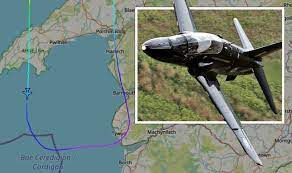 The jet, a Eurofighter Typhoon FGR4, sent the code at 22,966ft in the air near the Northumberland coastline, with flight tracking data showing it had come from Scotland and, after transmitting the 7700 signal, made its way towards RAF Coningsby, a Royal Air Force station located 13.7km south-west of Horncastle. Squawking is a way in which an aircraft declares an emergency with traffic control, so on-the-ground assistance is provided. It is not yet known what the issue was.

Boeing 757/767 pilot Captain Ken Hoke explained: “If a crew resets their transponder to the emergency code of 7700 (squawking 7700), all air traffic control facilities in the area are immediately alerted that the aircraft has an emergency situation.

“It’s up to the crew to let ATC know what the exact situation is.

“It may be an aircraft problem, medical issue, or something else.”
source:express

Achimota Forest lands allegedly owned by Sir John and mentioned in his Will; Ministry to investigate