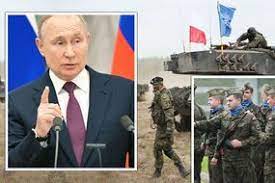 There is a growing sense of disillusionment with Putin from both pro and anti-war members of the Russian elite, according to Meduza, an independent news website based in Latvia, which cites sources close to the Kremlin. The pro-war faction is reportedly frustrated with the lack of progress while the business elite are displeased at the scale of the crippling sanctions. A future without the President is “increasingly being discussed” with conversations about potential successors taking place “behind the scenes in the Kremlin”, according to the site. It suggests these include Moscow mayor Sergei Sobyanin, prominent Putin ally and former president Dmitry Medvedev and first deputy head of the presidential administration Sergei Kiriyenko. One source said: “The president messed up, but then everything can be fixed – somehow come to an agreement [with the West and Ukraine].” The report says that while the discussions do not involve efforts to “overthrow Putin right now and a conspiracy…. being prepared”, “there is an understanding, or a wish, that in a fairly foreseeable future he will not govern the state”.

EU approves another 500 million euros of military aid for Ukraine