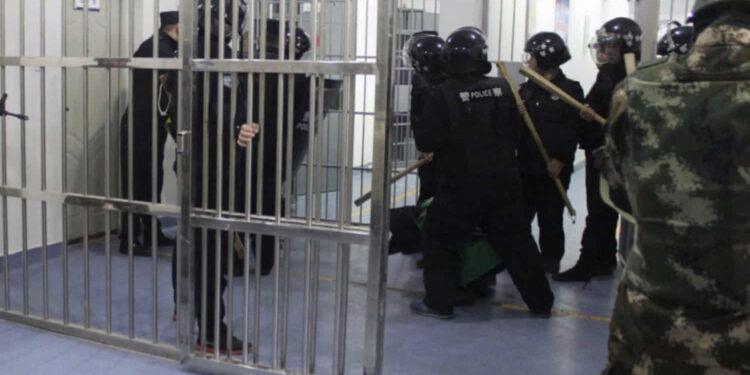 A new trove of hacked Chinese police photographs and documents shedding light on the human toll of Beijing’s treatment of its Uyghur minority in Xinjiang has been published as the UN high commissioner for human rights, Michelle Bachelet, visits cities in the region.

The data trove – referred to as the Xinjiang police files and published by a consortium of media including the BBC – dates back to 2018 and was passed on by hackers to Dr Adrian Zenz, a US-based scholar and activist, who shared it with international media earlier this year. It includes thousands of photographs of detained people and details a shoot-to-kill policy for people who try to escape.

The ruling Communist party is accused of detaining more than 1 million Uyghurs and other Muslim minorities in the far-western region as part of a years-long crackdown the US and politicians in other western countries have labelled a “genocide”. In addition to mass detentions, researchers and campaigners accuse Chinese authorities of waging a campaign of forced labour, coerced sterilisation and the destruction of Uyghur cultural heritage in Xinjiang.

Chinese officials and diplomats call such allegations “lies of the century” and insist that Beijing’s policy in Xinjiang is concerned with counter-terrorism, de-radicalisation and vocational training.

In a separate academic paper published on Tuesday, Zenz wrote that the newly leaked files explained how political paranoia that promoted exaggerated threat perceptions had led to the pre-emptive internment of large numbers of ordinary citizens. He was targeted by Chinese sanctions last year.

In October, the Associated Press reportedthat Chinese authorities had scaled back many of the most controversial methods adopted in Xinjiang. “The panic that gripped the region a few years ago has subsided considerably, and a sense of normality is creeping back in,” its report said.

On Tuesday China’s ambassador to the UK, Zheng Zeguang, tweeted: “Such a shame for BBC to carry the fabricated story about so-called ‘detention camps’. Pathetic for the media, in cahoots with the notorious rumour monger, to once again spread disinformation about Xinjiang.”

Tuesday’s publication of the mass data leak coincided with Bachelet’s controversial trip to Xinjiang. The former Chilean president told a group of China-based diplomats on Monday that her trip was aimed at promoting, protecting and respecting human rights, according to Bloomberg News, citing sources who attended the invitation-only online meeting. She did not say it was an “investigation”.

Bachelet is the first top UN human rights diplomat to visit China since 2005, and critics of the Beijing government have expressed fears that the authorities would organise what they called a “Potemkin-style tour” for her.

The US and the UK have both expressed scepticism over what could be realistically achieved on Bachelet’s trip. The British ambassador to China, Caroline Wilson, tweeted on Monday that she had “stressed the importance of unfettered access to Xinjiang and private conversations with its people,” in her call with the UN rights chief.

“We reiterate our longstanding expectation that China grants the UN high commissioner for human rights full and unfettered access to the region so that she can conduct a thorough assessment of the facts on the ground, and we are following her visit this week closely,” Truss said in a statement. “If such access is not forthcoming, the visit will only serve to highlight China’s attempts to hide the truth of its actions in Xinjiang.”

Bachelet is expected to visit the Xinjiang cities of Ürümqi and Kashgar on Tuesday and Wednesday as part of a six-day tour. The Chinese foreign minister, Wang Yi, meanwhile told Bachelet on Monday that he hoped her trip would “clarify misinformation” on China’s human rights record.

Adwoa Safo expected to appear before Privileges Committee on May 27