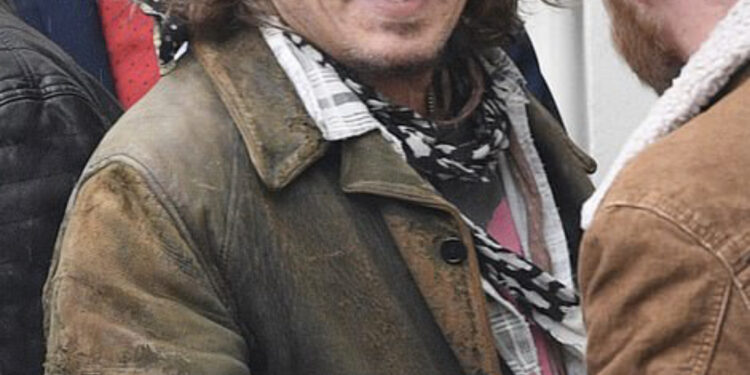 Johnny Depp has won his libel case against Amber Heard, saying he now has ‘his life back’ after the jury ruled he was defamed and awarded him $15million.

In a statement after Wednesday’s verdict, Depp said, ‘Six years ago, my life, the life of my children, the lives of those closest to me, and also, the lives of the people who for many, many years have supported and believed in me were forever changed.

‘And six years later, the jury gave me my life back. I am truly humbled.’

After less than three days of deliberation, Heard was awarded $2million in compensatory damages out of the $100million she was seeking in her countersuit against her ex-husband. She was awarded zero dollars in punitive damages.

Despite the jury awarding Depp $15million, the judge reduced the $5million punitive damages award to the Virginia maximum of $350,000, reducing Depp’s total to $10,350,000 – minus the $2million he was ordered to pay Heard. In total Depp walks away with $8.35million in damages

Depp was not present as he was in the UK on tour with guitar legend Jeff Beck – a source claimed it was due to ‘previously scheduled work commitments.’ He was seen celebrating at a pub in Newcastle with Beck and UK singer Sam Fender. Meanwhile, Heard walked into court wearing a black dress and appeared anxious. After the verdict was read out Heard briefly hugged her lawyers then exited the courtroom.

Depp’s legal team were all smiles and joined each other in a group hug of 10 people.

In a dramatic courtroom moment, the jury returned with their verdict only to be told by the judge that they hadn’t completed the paperwork properly.

The judge was handed an envelope by an officer of the court and asked the lawyers to approach for a brief discussion. Left alone, Heard looked down at the floor, lost in thought before her lawyers came back to her.

Judge Azcarate addressed the jury and said: ‘I need to give the forms back to you. When you find for a defamatory statement, one or more, you need to fill out the compensatory damages. It needs to be at least a dollar up to whatever the damages are. For punitive damages you can put a zero. I need those lines filled out. Retire back to the deliberation room and do that for me.’

The jury left as the judge told everyone not to go anywhere far, before they came back to deliver the verdict.

Amber Heard said in a statement after the verdict, ‘The disappointment I feel today is beyond words. I’m heartbroken that the mountain of evidence still was not enough to stand up to the disproportionate power, influence, and sway of my ex-husband. 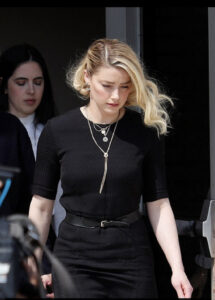 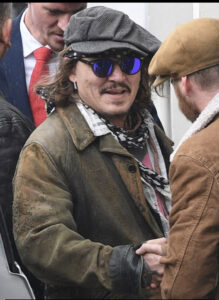 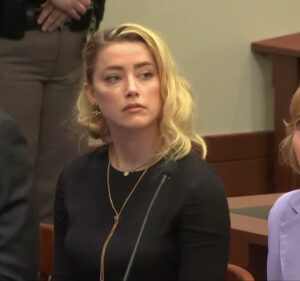 Before the jury came in Judge Penney Azcarate addressed the public gallery and said: ‘This is a court of law. Regardless of the verdict I will not tolerate any outbursts whatsoever.’

Speaking outside court, Depp fan Tiffany Lunn, who has been in court every day for the trial said: ‘It was a good verdict. Depp wasn’t going for the money, they found she didn’t have any clout in anything she said.

John Witherspoon, a Virginia lawyer, said: ‘It was very fair. I was glad to see Depp prevail as I thought evidence supported his side of the case. I feel bad for Amber, I feel her lawyers did the best job they could. I’m sure Amber is bitterly disappointed and not able to understand what happened. Her mindset was she was in the right all along and that was revealed on the stand. I’m sorry the case has been a platform for a lot of venom and vitriol. I wish her the best. One of the positive things to come out of the case is a larger national conversation about these issues.’

Another woman who described herself as a Depp fan, said the case ‘went in the correct direction.’

She said: ‘This was a really tough case. I feel the most important thing aside from money was he got to tell the truth about what happened. Even if he won $1 he got to finally speak up for himself. She did cause a hoax and said some false things.

‘I tend to believe all women but this case opened my eyes to not believing all women and following the evidence. I just was a little bit disappointed in myself for taking that stance at first because I didn’t have all the facts.

The lightning-fast verdict came as the culmination of the six-week trial that was the OJ Simpson case for Generation Z: a spectacle that was chopped up and replayed on TikTok in clips that were viewed tens of millions of times.

It was the second time the former husband and wife squared off in court: Depp lost a libel case against a British newspaper at the High Court in London in 2020 where a judge ruled it was ‘substantially true’ he was a wife beater.

In the new case held in Fairfax, Virginia, Depp, 58, sued Heard for $50million claiming that she defamed him with an op-ed piece in the Washington Post in 2018 in which she claimed to be a survivor of domestic abuse.

Heard, 35, countersued for $100million claiming that Depp’s lawyer Adam Waldman made defamatory statements by calling her claims a ‘hoax.’

Since the marathon trial started on April 11, Depp has called 38 witnesses while Heard’s team called 24.

Both Depp and Heard gave evidence for four days each including a forensic cross examination from the opposition lawyers – then both returned to the witness stand to testify a second time.

The jury saw dozens of texts, photos, videos, medical records and even pages from the former couple’s ‘Love Journal’ they hand wrote to each other.

The libel case was so complicated that the verdict sheet had 42 questions the jury had to answer before delivering the verdict: 24 questions for Depp’s claims and 18 for Heard’s counterclaim.

A verdict form is used to formalize the jury’s decision on the case. Spanning eight pages, it means the jury had to decide on dozens of matters before reaching their verdict.

There is also a section where they had to decide on the damages for Depp and Heard – and any punitive damages.

The court heard clips of recordings that Depp and Heard made during their arguments, some of their most intimate moments that were played back for the world years later in the most public setting imaginable.

Here DailyMail.com wraps up the sometimes explosive testimony and evidence in the case: 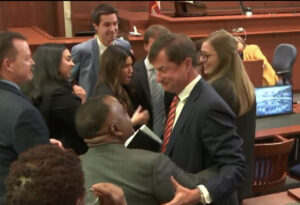 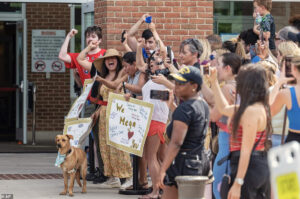 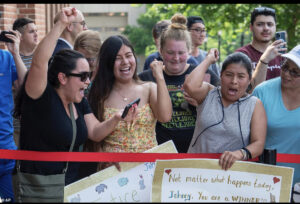 Despite the torrent of evidence about abuse from both sides, the case was actually about a far narrower issue.

For Depp’s $50million claim, the jury had to decide whether or not Heard had defamed him with her piece in the Washington Post that said she was a survivor of domestic abuse. The article did not name Depp, but he argued that it was obvious that she was referring to him.

Depp sued over three parts of the article, which said: ‘I spoke up against sexual violence — and faced our culture’s wrath’; that Heard was a ‘public figure representing domestic abuse’ and that she had a ‘rare vantage point of seeing how institutions protect men accused of abuse.’

As part of this, the jury had to decide whether or not Heard was speaking about a matter of ‘public concern.’ If so she was protected under the First Amendment.

For Heard’s counterclaim, for which she demanded $100million, she claimed that Depp’s lawyer Adam Waldman defamed her with three statements he made to DailyMail.com in 2020.

They were that Heard ‘used fake sexual violence allegations as sword and shield’; ‘this was an ambush, a hoax…Amber and her friends spilled a little wine, roughed the place up, got their stories straight under the direction of a lawyer and publicist, and then placed a second call to 911’ and another statement calling her claims an ‘abuse hoax.’

In both cases each party had to prove that the statements were made with ‘actual malice’, meaning they were done knowing they were wrong.

The jury found one of Waldman’s statements to DailyMail.com had defamed Heard, for which she was awarded $2million in damages.

Speaking in a halting, rambling voice, Depp portrayed himself as a ‘Southern gentleman’ who was scarred from his upbringing in Kentucky at the hands of an abusive mother.

He said that Heard’s claims of abuse were ‘heinous and disturbing’ and were ‘not based in any species of truth.’

When Heard filed for a restraining order in 2016 following their divorce, Depp went from ‘Cinderella to Quasimodo’ in Hollywood, he complained.

Like with his mother, Depp would try to walk away from conflict but she never let him.

While Depp admitted he did have a ‘monster’ inside of him that came out when he drank and did drugs, he claimed Heard was the real abuser.

Depp said that at the beginning of their relationship Heard felt ‘too good to be true’ but then she started to ‘reveal herself’.

‘It was like you were pinned to a wall and you have to just listen to it and take it.’

According to Depp, it felt like he was reliving his relationship with his mother all over again, and Heard had a ‘pure hatred’ of him.

Depp said that Heard had a ‘need for conflict’ that she enacted upon him.

He stayed with her because Heard threatened to kill herself if she left him and, just like his father, he became stoic in the face of a volatile woman.

The abuse culminated in the incident in Australia where Depp claimed that Heard became ‘possessed’ and threw a vodka bottle at him, hitting his hand and severing his fingertip.

He told the jury: ‘My hand is on the edge of the bar like that, leaning over.

‘She threw the large bottle and it made contact and shattered everywhere and I honestly didn’t feel the pain at first at all, I felt no pain.

‘What I felt was heat and I felt as if something were dripping down my hand and then I looked down and realized that the tip of my finger had been severed. I was looking directly at my bone sticking out.’

Then Heard stubbed a cigarette out on Depp’s face, he claimed.