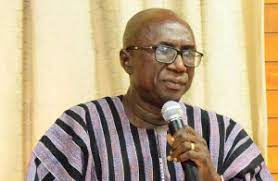 Mr. Dery says government is leaving no stone unturned in its quest to protect lives and properties.

Speaking on the floor of Parliament, Ambrose Dery said the Ghana Immigration Service has increased its border patrols to check persons arriving into the country illegally.

“Additional personnel have been deployed to the Ghana Immigration Service Border Command to beef up border patrol efforts. The Immigration Service is the state’s lead agency mandated to manage and patrol the country’s borders and is continuously enhancing its patrol and profiling techniques in order to stop illegal border crossings and detect criminal elements in their attempt to enter the country.”

The West Africa Centre for Counter-Extremism in its latest report warned that Ghana is at high risk of terrorism following pockets of civil, political, and social unrest in parts of the West African sub-region.

It said threats of violent extremism are heavily descending towards coastal states from the Sahel regions and that Ghana could not be spared, for that matter, given happenings in its neighbouring countries.