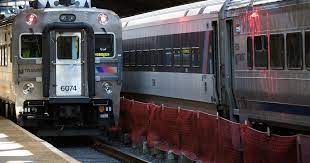 New Jersey Transit suspended rail service into and out of New York City on Friday evening after a day in which dozens of trains were canceled because of a lack of available engineers.

NJ Transit said the problem was the result of an illegal job action by the union representing locomotive engineers, who currently don’t have a collective bargaining agreement. The number of engineers who called out on Friday was triple the average number for a weekday, NJ Transit said.

Video: Ghanaian in US peeved after being denied access to Akufo-Addo forum

According to NJ Transit, the agreement being negotiated includes Friday’s observance of Juneteenth as a holiday, while the agreement currently in place does not.

An email message seeking comment was left with the union’s local chairperson Friday.

“NJ Transit is disappointed that the union would perpetrate such an act on the more than 100,000 commuters who depend on NJ Transit rail service every day,” the state-operated transit corporation said in a statement. “We intend to explore all legal remedies in response to this illegal and irresponsible action.”

In an email Friday evening, New Jersey Transit said the last trains on 11 rail lines leaving New York, which normally operate until after midnight, would depart between about 7:15 p.m. and 8:15 p.m.

Rail tickets were being cross-honored on bus and light rail lines as well as on PATH trains operated by the Port Authority of New York and New Jersey and ferries operated by NY Waterway.

Mensa Otabil was never a member of National Cathedral board – Secretariat