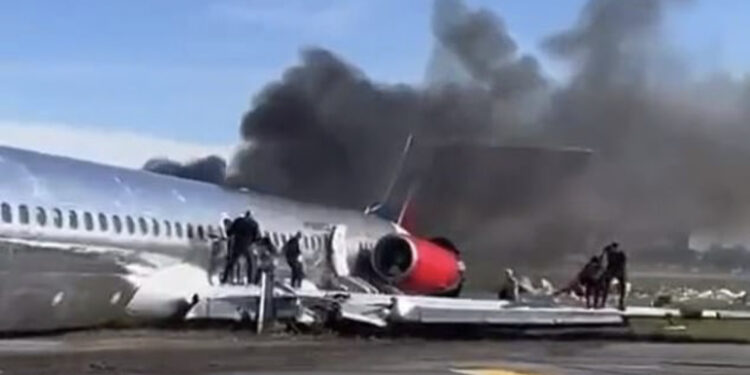 A Dominican airline plane carrying more than 100 passengers crash-landed Monday at Miami Airport after its landing gear failed upon touchdown.

The aircraft ripped through a small building and a communications tower while skidding on its belly across the tarmac before bursting into flames.

Three people were rushed to the hospital after the accident. The plane was carrying 126 passengers and 11 crew members.

The Federal Aviation Administration said the jet’s landing gear collapsed. It was part of a fleet by Red Air, a discount airline founded last year in the Dominican Republic. 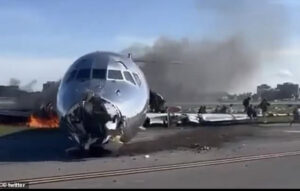 ‘I thought I was going to die, actually,’ Paola Garcia told CBS Miami. ‘There was an old man next to me and I was hugging him. It was horrible.’

Footage taken from the runway showed the nose of the silver jet smashed to pieces as black smoke billowed from a fire burning on its left wing.

The mangled metal of the communications tower could be seen wrapped around the burning wing.

Passengers could be seen frantically exiting the fuselage, screaming as they fled the wreckage.

Other footage showed the plane skid on its belly across the runway, then collide with the tower which exploded into flames. 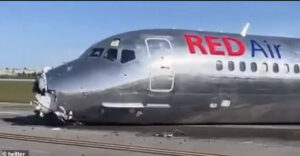 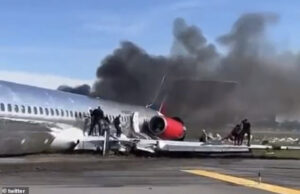 ‘Panic, almost panic. it was a terrible experience, actually, but like I said I feel safe,’ he told CBS Miami, ‘It happened like one minute and then you could see all the officers through the window doing their jobs.’

The aircraft was a part of the RED Air fleet, and had arrived in Miami from the Dominican Republic.

The plane touched down at 5:38pm. Fire crews were dispatched at 5:39pm, WPLG reported.

A spokesperson for Miami Airport said that flights were delayed due to the crash. 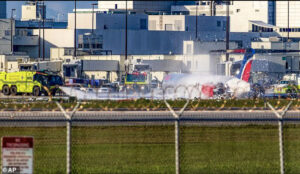