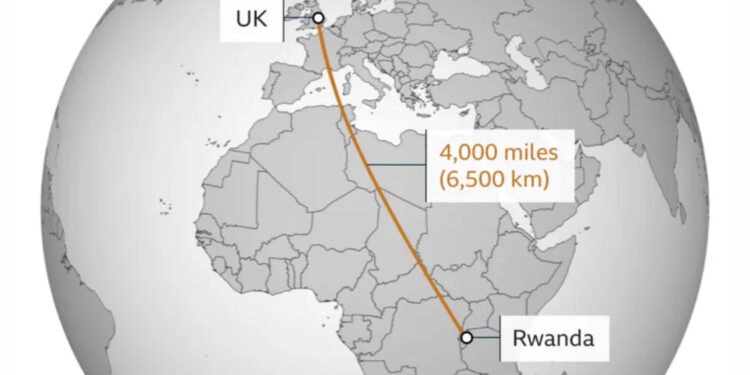 The European Court of Human Rights block on sending asylum seekers to Rwanda could be overturned by ministers under new proposals.

The plan, being introduced to Parliament, would allow ministers to ignore the court’s injunctions.

It is part of changes to the Human Rights Act, introducing what ministers say will be tougher legal tests.

Critics say the proposals are confusing and would create two tiers of rights that hand more power to ministers.

But Deputy Prime Minister Dominic Raab said his proposed Bill of Rights fixed problems with the Human Rights Act without abandoning it altogether.

Unveiling the plans, Mr Raab confirmed the government would not quit the European Convention on Human Rights, a set of legal safeguards allowing ordinary people to challenge what they say is unfair treatment by the government.

The Strasbourg court, which is nothing to do with the European Union, issued an injunction blocking the home secretary from putting an asylum seeker on the flight, despite earlier decisions by judges in London not to intervene.

That decision triggered other appeals and ultimately the cancellation of the flight.

Under the government’s proposed Bill of Rights, ministers would be able to ignore such injunctions, known as Rule 39 orders, because they are not technically part of international law.

Mr Raab, who is responsible for changes to constitutional laws, said: “The Bill of Rights will strengthen our UK tradition of freedom, whilst injecting a healthy dose of common sense into the system.

“We will be very clear in domestic law that Rule 39 interim orders do not bind UK courts or indeed public bodies or officials.”

The government’s proposals, unveiled in December, have been criticised by lawyers as confusing and arguably unnecessary, because British courts can already ignore rulings from Strasbourg.

Shadow attorney general Emily Thornberry questioned whether the move would actually change anything, or rather add “more and more layers of bureaucracy on the application of the Human Rights Act”, so it will merely “gum up the system”.

She said: “They’re just trying to think of anything that they can take on at the moment in order to distract us all from what’s really happening, which is their inability to govern – they’re trying to pick yet another fight,” she told the BBC.

Law Society president I Stephanie Boyce, who represents solicitors, said the package was on a collision course with the rest of the law.

“The bill will create an acceptable class of human-rights abuses in the United Kingdom,” she said.

“It is a lurch backwards for British justice. Authorities may begin to consider some rights violations as acceptable, because these could no longer be challenged under the Bill of Rights, despite being against the law.

“Overall, the bill would grant the state greater unfettered power over the people, power which would then belong to all future governments, whatever their ideologies.”

“Ripping up the Human Rights Act means the public is being stripped of its most powerful tool to challenge wrongdoing by the government and other public bodies.

“This is not about tinkering with rights, it’s about removing them,” he said.