The 47-year-old rap star hit the stage in a clinging tiger print bodysuit that was sheer enough to reveal that she was bra-less.

In keeping with the Pride theme of the festivities, she rocked a long, flowing hairdo that featured rainbow highlights. 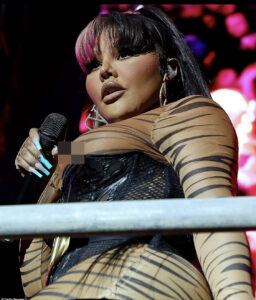 She pulled a latticed black leather corset over the ensemble and added a belt, emphasizing the classic hourglass effect.

Adding a splash of glitz to the look with jewelry, she sharpened her unmistakable features with heavy makeup and strutted her stuff on a pair of black boots.

Lil’ Kim, whose Christian name is Kimberly Jones and who herself is a born and bred New Yorker, was part of a star-studded lineup at the festival. 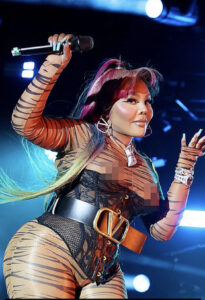 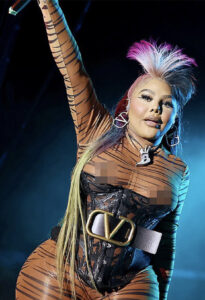 Other acts at the two-day extravaganza include Netta, Raye, Shenseea, headliner Kim Petras and the art collective Papi Juice.

Lil’ Kim herself has always enjoyed a devoted gay fanbase, and when she covered Out in 1999 she offered her own theories as to why. 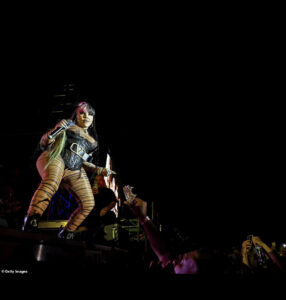 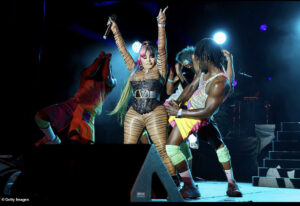 And they like people with confidence because they have to have a lot of confidence to be the way that they are. I mean, I’m like whatever – if you don’t like it, I don’t care. F*** you. I’m going to wear this anyway.’

The native Brooklynite clarified that ‘I also try to have a good spirit about it. I can’t go on stage with my t**** hanging out and not act like I love what I do because then it would come off raunchy, not classy.’

Said she: ‘Gay people see me as Grace Jones, Tina Turner, Prince, or Madonna – all those people that have gone over the top and just don’t give a damn about what anybody says. And they love people who are stars because, you know, gay people always feel like they’re stars.’ 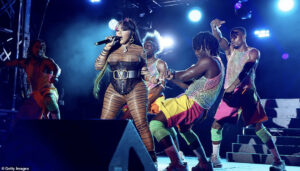