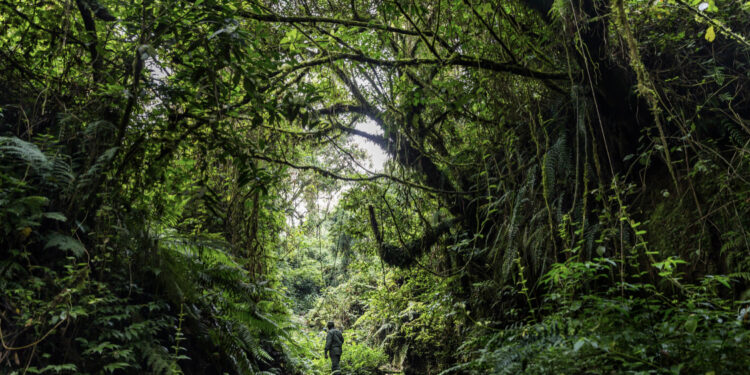 The Democratic Republic of the Congo has announced it will auction oil and gas permits in critically endangered gorilla habitat and the world’s largest tropical peatlands next week. The sale raises concerns about the credibility of a forest protection deal signed with the country by Boris Johnson at Cop26.

The planned sale already included permits in the Cuvette Centrale tropical peatlands in the north-west of the country, which store the equivalent to three years’ global emissions from fossil fuels.

The Congo basin is the only major rainforest that sucks in more carbon than it emits and experts have described it as the worst place in the world to explore for fossil fuels.

Environmental groups have urged the leading fossil fuel companies to sit out the auction and said president Felix Tshisekedi, who signed a $500m (£417.6m) deal to protect the forest with Boris Johnson on the first day of Cop26 last year, should cancel the sale. The Congo basin rainforest spans six countries and regulates rainfall as far away as Egypt.

Speaking to the Guardian, Budimbu acknowledged environmental concerns but defended his country’s right to exploits its natural resources. He said revenue from the oil and gas projects was needed to protect the Congo basin forest and to economically develop the country.

“We have a primary responsibility towards Congolese taxpayers who, for the most part, live in conditions of extreme precariousness and poverty, and aspire to a socio-economic wellbeing that oil exploitation is likely to provide for them,” he said.

Earlier this week, Budimbu told the Financial Times that Hollywood actors Ben Affleck and Leonardo DiCaprio had got “on their high horse” and helped halt oil and gas exploration in Virunga after a 2014 Netflix documentary, but said this time the DRC would not be stopped.

The sale, which is scheduled for 28 and 29 July, has raised concerns about the credibility of a letter of intent signed by Boris Johnson on behalf of the Central African Forest Initiative (Cafi) for a 10-year agreement which includes objectives to protect high-value forests and peatlands with 12 donor nations.

Lord Goldsmith, the UK’s minister for the international environment, said the UK government was “very concerned” about plans for oil exploration in Cuvette Centrale.

“We strongly believe local people need to directly benefit from their forests, and degrading them doesn’t achieve that. We will continue to work with the Democratic Republic of Congo on solutions to protect this vital ecosystem, and ensure that the commitments on mining, oil and gas sector reform are met,” he said.

DRC is one of the poorest countries in the world, with nearly three-quarters of its 60 million people living on less than $1.90 a day in 2018, according to the World Bank. The country’s per capita emissions were 141 times lower than the UK’s in 2019, which is responsible for 3% of all historical global emissions, not including those under colonial rule, according to Carbon Brief.

Irene Wabiwa, international project lead for the Congo forest campaign at Greenpeace Africa, said the auction made a mockery of DRC’s efforts to position itself as a solutions country for the climate crisis.

“The neocolonial and ever-growing scramble for oil and gas in DRC, which now threatens the Virunga national park, in addition to water sources, peatlands and protected areas, is an eerie example of the unhinged obsession to monetise nature,” she said.

Simon Lewis, professor of global change science at University College London and global expert on the DRC’s peatlands, said the Congo basin was the worst place in the world to explore for oil and gas.

Opening these forests to oil development will lead to hunting, deforestation, oil pollution, carbon emissions and social conflict. The oil auction is an auction to begin a wildlife, health, climate and human rights catastrophe,” he said.

“Oil development risks social unrest, as seen in the Niger Delta. Conflict in the centre of DRC, just a river trip from Kinshasa, could threaten the stability of the government and the whole country. Given that the 1998-2003 Congo war and its aftermath killed more than 5 million people, everything possible should be done to avoid conflict in Congo. The auction should be cancelled.”

Cafi said it was unable to comment at this stage.
The guardian