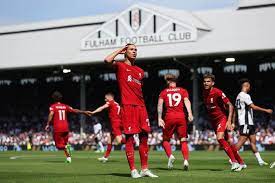 ‘We’re back!’ read the scarves handed out by Fulham and proudly held aloft as they emerged to take on Liverpool in the glorious west London sunshine. Optimism abounds on days like these, not least at Fulham with its magnificent setting on the River Thames. A stroll through Bishop’s Park lifts the soul. At least it does, until winter comes and the Premier League juggernaut crushes it in its path.

Fulham’s best player in their promotion season had been signed by their opponents and Jurgen Klopp, in the midst of an injury crisis, could still afford to leave Fabio Carvalho on the bench. This is what competitive balance looks like in the Premier League. As such, you were tempted to suggest that Fulham that they keep the scarves in storage for use in two years, such is the yo-yo nature of clubs such as these.

And yet, in a wonderful plot twist, the predictable storyline diverged and a different narrative emerged. Fulham burst from their traps. Within seconds Aleksander Mitrovic – a kind off yo-yo players in that he is too good for The Championship but has never cut it in the Premier League – was poking a shot wide. Early nerves, surely, on Liverpool’s part? A corner for Fulham followed on six minutes and the stadium, now with an impressive modern riverside stand under construction, fairly shook to its foundations. Liverpool spent ten minutes trying to get out of their half. 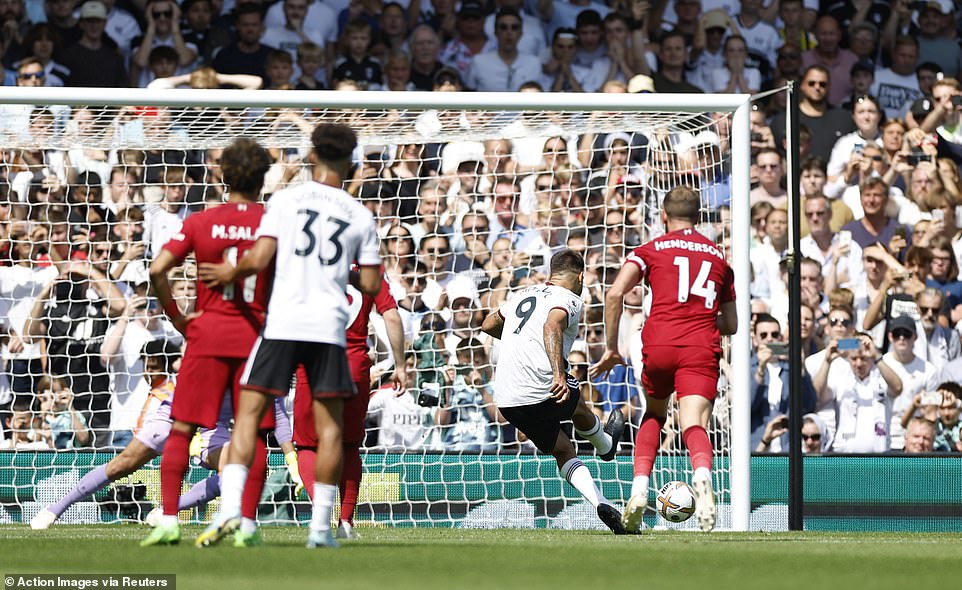 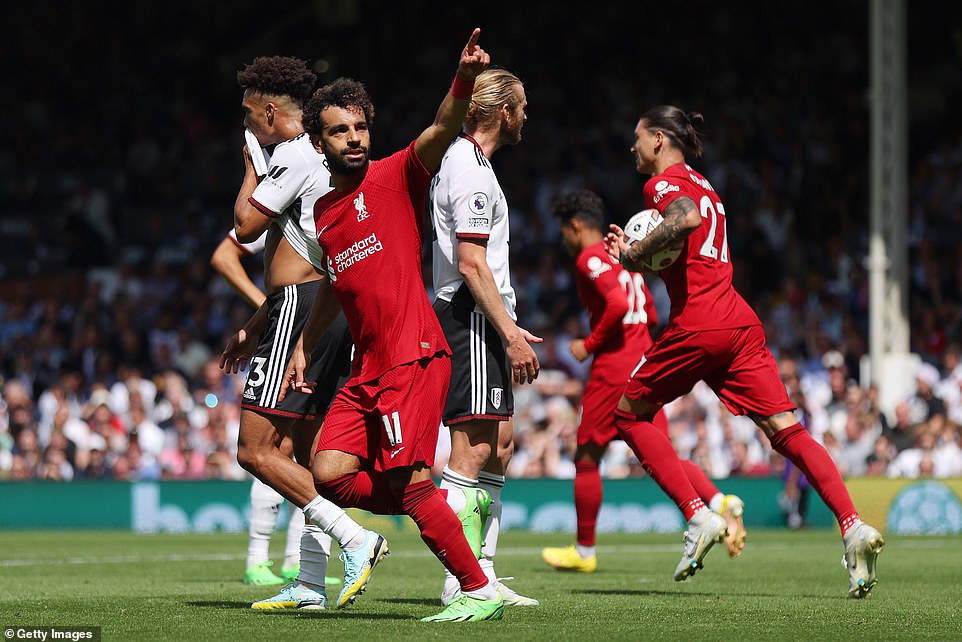 All entertaining enough. We waited for Liverpool to find their stride, to pull away and leave Fulham in their wake. Yet Liverpool they seemed edgy. Virgil van Dijk was nowhere near his usual authoritative self. Alisson Becker sliced a clearance.

Trent Alexander-Arnold looked unsettled by the combined attention of Bobby Cordova Reid and Andreas Pereira. Harrison Reed and Joao Palhinha weren’t allowing Thiago or Jordan Henderson any time to settle on the ball. When Liverpool did stir, Tosin Adarabioyo and Antonee Robinson stood tall, a foot here and a head there to avert the danger.

There was one 50-50 challenge between Jordan Henderson and Robinson where the thud of the ball was so loud it could easily be heard above the raucous cheers. The Fulham man came out best. 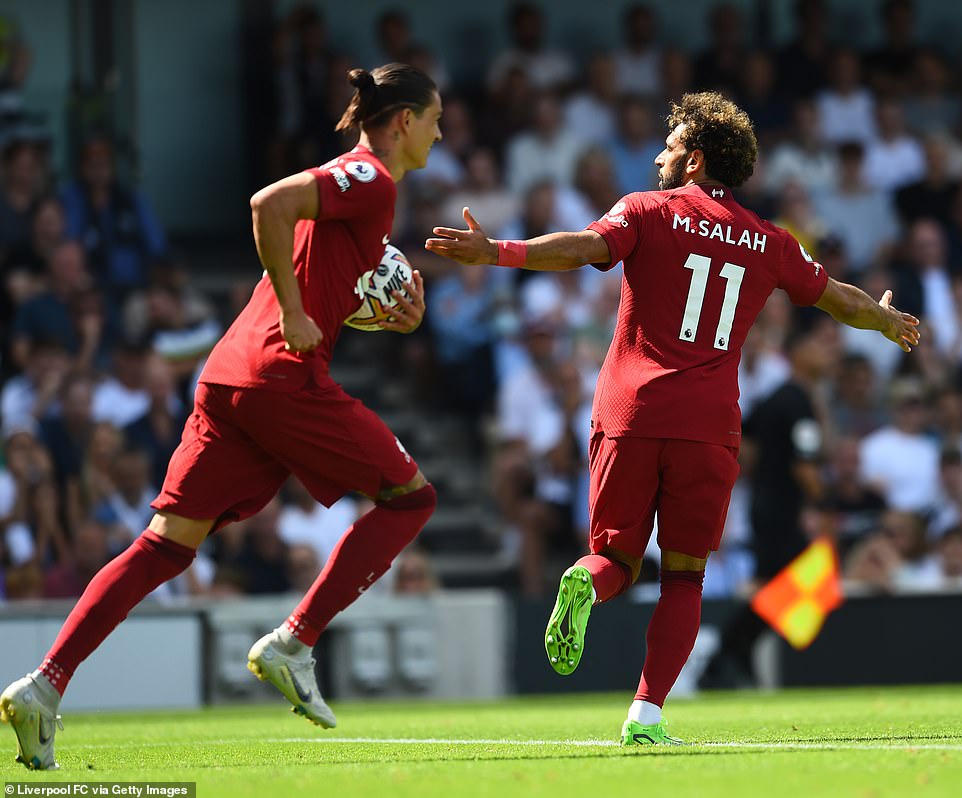 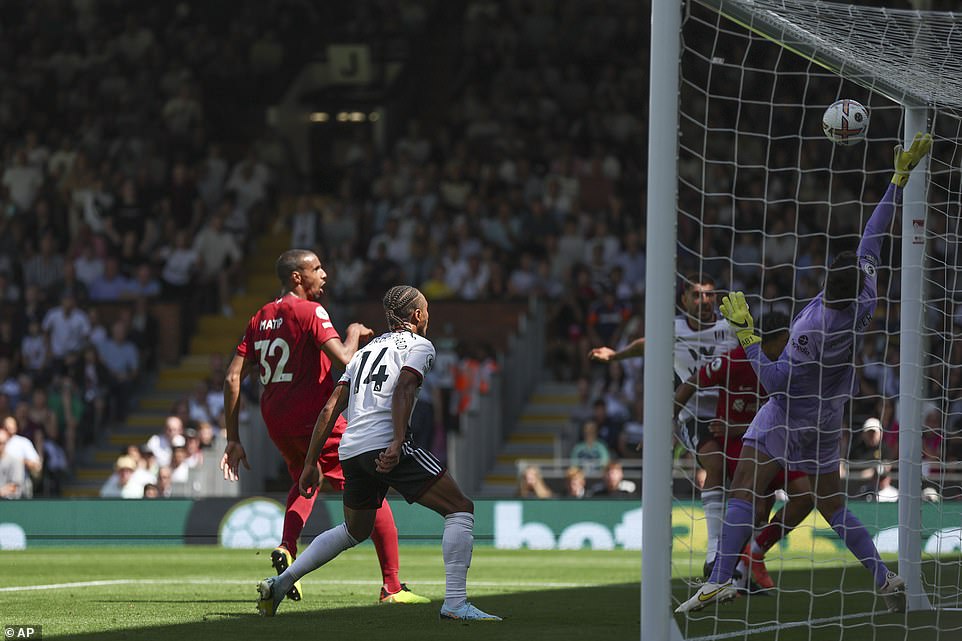 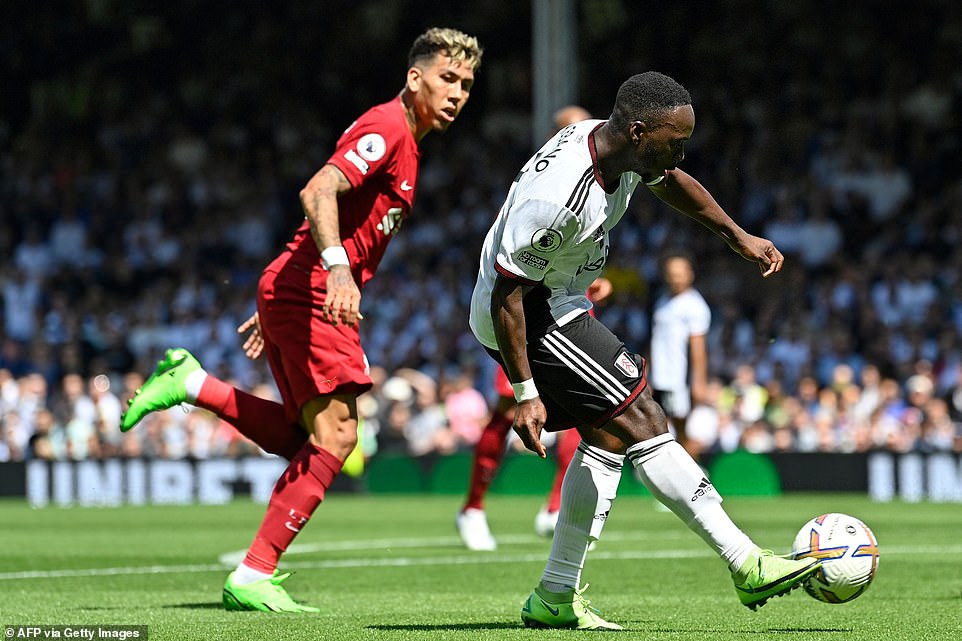 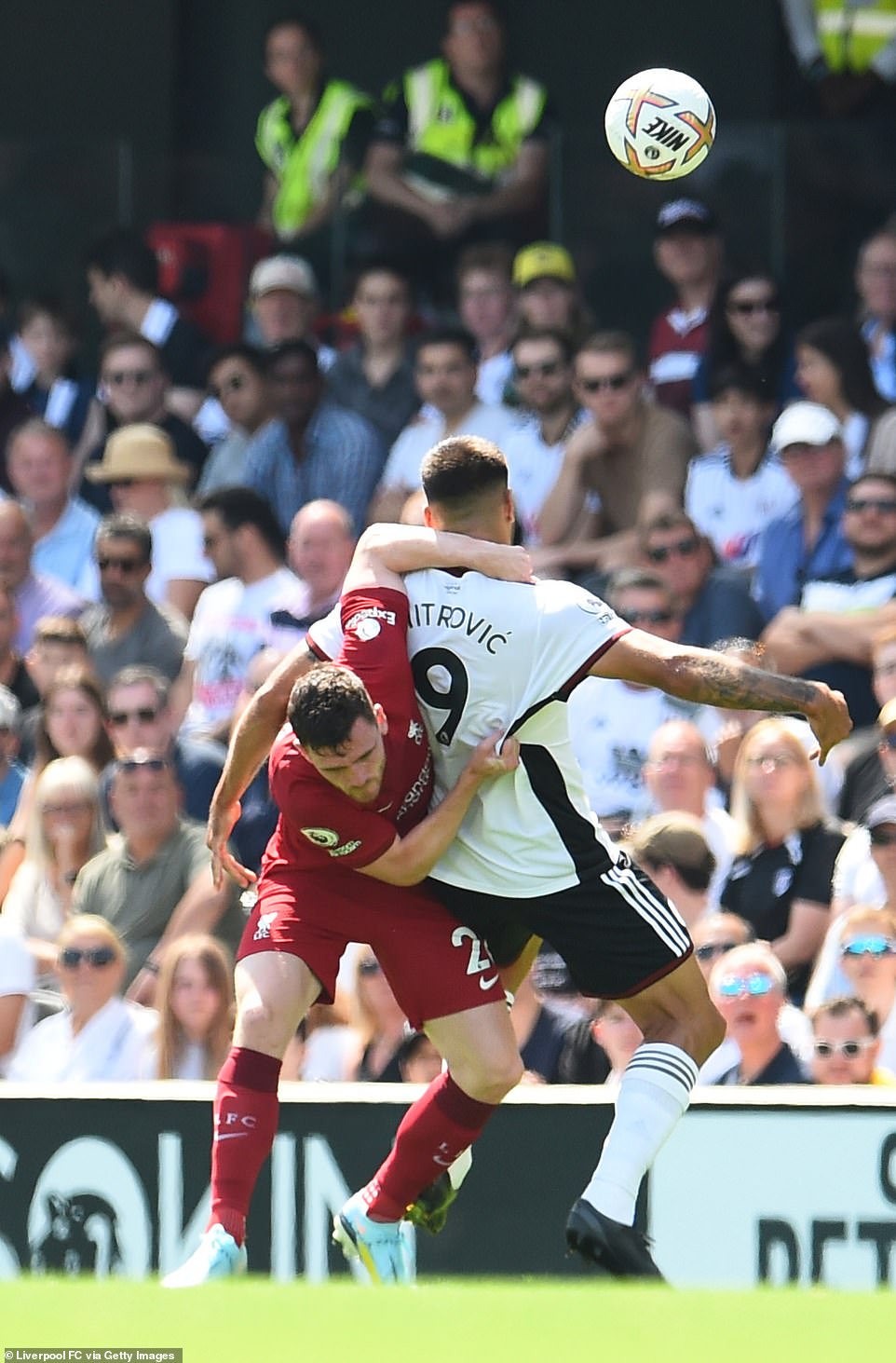 As such, it wasn’t a huge surprise when Fulham took the lead. It was just a repetition of the first-half pattern, whereby they stood strong and then swiftly turned defence into offence, a Marco Silva masterclass of counter-attacking football. They were physical too.

Liverpool complained that Henderson had been pushed over and fouled as Fulham transitioned from defence to attack. But it was Andreas Pereira, dropping into space, who instigated the move, feeding Reed, who dashed up the pitch, before transferring responsibility to Neeskens Kebano.

He in turn moved the ball on to the swiftly arriving Kenny Tete. This all took a second or two at most. As such, Liverpool were completely out of shape as Tete lifted a perfectly weighted deep cross to the back post. It hung for what seemed like an age as Mitrovic loomed menacingly behind Alexander-Arnold. 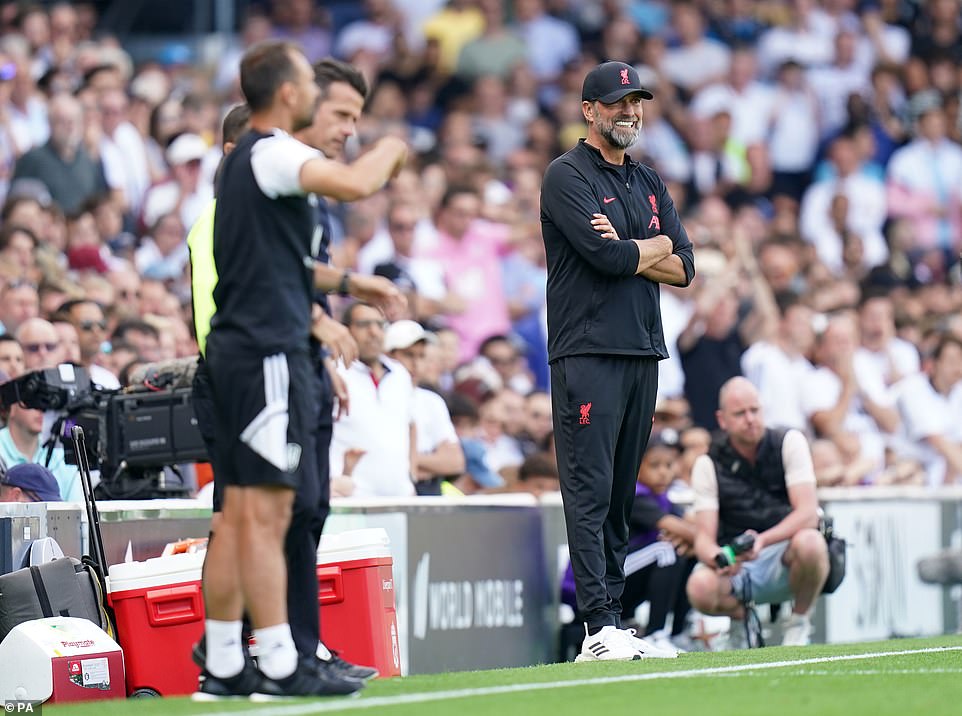 The Liverpool right-back was no match for Mitrovic’s leap and power, crushed by the Serb’s utter determination to meet the ball with his head. Thirty-three minutes in, it was 1-0 to Fulham.

Of course, Liverpool would respond. Alexander-Arnold demonstrated the part of the game at which he excels by delivering a stunning cross-field pass for Robertson, whose cross was a millimetre away from being turned in by Luis Diaz. The Colombian then conjured his own chance on 39 minutes with a superb curling shot that bounced off the post. Still, Fulham held out until half time and came out with fresh fight.

When Mitrovic schooled van Dijk on 55 minutes with a neat back-heeled turn to leave the Dutchman standing with his dignity shorn, you suspected it might be Fulham’s day. When, seconds later Kebano struck a glorious shot across goal and, with Alisson beaten, it struck the inside of the post, quivered and then spun away from goal rather than back into the net, you feared it may not be. 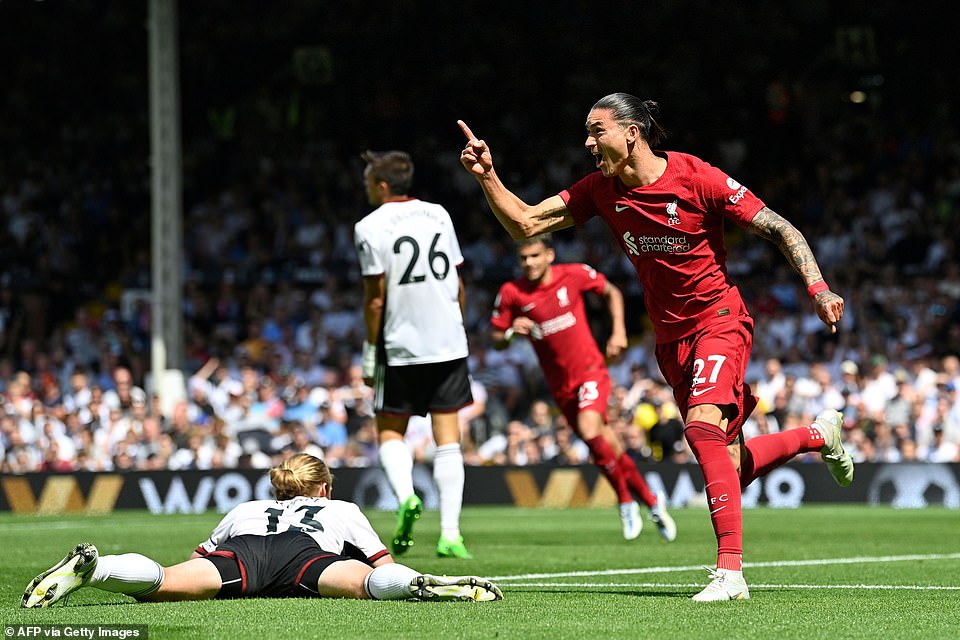 Thiago (injured) and Firmino departed on 51 minutes and Fabinho three minutes later. On came Harvey Elliott, Darwin Nunez and James Milner. It was the equivalent of sending for the cavalry and they performed the required task. Milner played in Elliott on 64 minutes, who in turn found Salah. He rolled the ball across for Nunez who finished from close range for 1-1 after getting across Fulham’s backline with consummate ease.

Now came the charge as Tim Ream cleared off the line after Nunez bullied his way to another shot. And yet Fulham weren’t done. Another quick counter saw Mitrovic advancing on goal. Van Dijk, who looked as uncomfortable as he’s ever appeared for Liverpool, dangled a lazy leg, which Mitrovic gratefully embraced, stumbling to the ground. It was a clear penalty and Mitrovic doesn’t miss those, drilling it into the bottom right hand corner past Alisson.

It should have been the last word, except that, Fulham, playing to their max, were always on the edge of a mistake. It came on 82 minutes, Alexander-Arnold played a sumptuous ball which confused Tosin and Ream, whose back header was neither decisive nor effective. It fell for Nunez, who, with superb speed of thought and unselfishness, touched it to Salah, who rolled it in for 2-2. Still, Fulham would survive a last-minute scare when Henderson rattled the bar in injury time. They deserved as much. 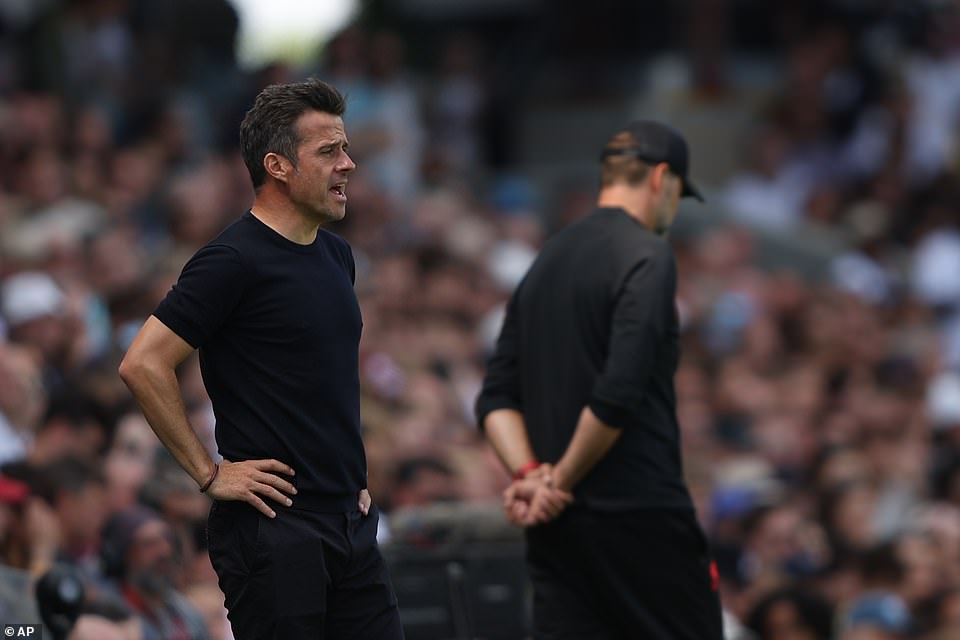