University of Ghana riot: Vandals takes away bust of John Mensah Sarbah from the Vikings hall 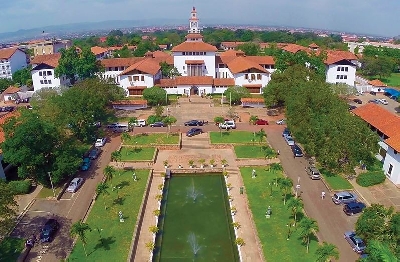 An inter-hall fight ensued between the residents of the Commonwealth and John Mensah Sarbah halls of the University of Ghana last night.

Narrating the incident to myjoyonline.com, an eyewitness who pleaded anonymity said residents of Sarbah Hall celebrated ‘Sarbahfest’ on Friday.

As part of the festivities, the residents of the hall went on a procession, what is referred to in local parlance as ‘Jama’.

Somehow, one of them strayed to the Commonwealth Hall, he was beaten up and his phone taken away.

The beaten Viking is said to have returned to his hall of residence to report the incident. His colleagues then followed him to the Commonwealth Hall and a fight ensued.

In the process, a vehicle parked at the Mensah Sarbah Hall car park was set ablaze

“Besides burning the car, they came to fight, destroyed a lot of things and took away one of statues at the Sarbah Hall,” our source said.

Residents of Commonwealth Hall of the University are otherwise known as Vandals and Sarbah Hall residents are also called Vikings.

Explosive ‘Sex For Grade’ scandal to hit University of Ghana