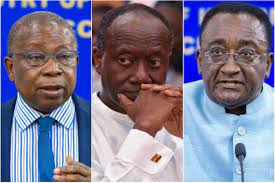 The Chief Executive of Kufuor Foundation, Prof Baffuor Agyemang-Duah, is the latest influential individual to join calls for a ministerial reshuffle in the Akufo-Addo government.

His call comes after President Akufo-Addo openly refused to heed to earlier calls for a reshuffle.

The President, in his defence, said the opposition National Democratic Congress (NDC) and jobless people are those calling for the move because they want to destablise his administration.

However, Prof Agyemang-Duah is of a different view.

According to him, if not for anyone at all, the Health, Finance and Agriculture Ministers deserve to be reshuffled out of government.

He insisted that there are loud calls for the three ministers – Kwaku Agyemang-Manu, Ken Ofori-Atta and Dr. Owusu Afriyie-Akoto – to step aside.

He argued that they have been underperforming in the last six years.

“If you put your ears to the ground what we hear popularly is the health sector implying the Minister of Health as well as the Minister of Agric, these two including the Finance are the prominent ones,” he told JoyNews on Sunday.

The Former UN Senior governance advisor also asked the President to assess the performance of his ministers.

According to Prof Agyemang-Duah, this will inform President Akufo-Addo to take strategic decisions that will help reshape his government.

“So all these could be factors that I think if the President wants to make a move he can take an account of to inform his decision,” he explained.