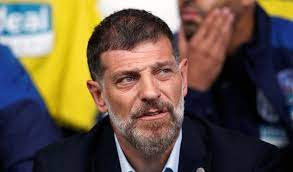 Watford have sacked Rob Edwards after 11 games in charge and appointed Slaven Bilic as their manager. Bilic is returning to English football after agreeing an 18-month deal, subject to receiving a work permit, and should be in charge for his new side’s trip to Stoke on Sunday.

The former West Brom and West Ham manager has been out of work since leaving Chinese Super League club Beijing Guoan in January.

Javi Gracia sacked by Watford after one win in 10 matches

Bilic, who led West Brom into the Premier League in 2020 before being fired three months into their first campaign back in the top flight, is Watford’s 10th permanent manager in the past five years. The club have acted typically quickly with Edwards, who was appointed in May after leaving Forest Green in controversial circumstances, and believe Bilic can give them a jolt after a disappointing start to their attempts to recover from last season’s limp relegation from the Premier League.

Watford’s owner, Gino Pozzo, said: “As with all decisions taken by the board, I believe this change to be in the best interests of the club. We felt Rob had enough time to show us the identity of his team, however performances haven’t reflected our hopes and ambitions.

“Now we must move forward, and, in Slaven Bilic, we have secured the services of an experienced coach who has recent experience of promotion to the Premier League.”

Watford took the decision to fire Edwards because of fears they are already losing ground at the top of the Championship table. They are 10th after winning three of their first 10 games, nine points below Sheffield United at the top and six behind Norwich in second place and they believe making a change during the international break will give Bilic time to settle in as he prepares for a push for automatic promotion.

The Watford hierarchy believe their squad is capable of better performances. They lost their main striker Emmanuel Dennis to Nottingham Forest last month, but managed to hold on to forwards Ismaïla Sarr and João Pedro despite interest from Premier League clubs. Edwards was also given funds to improve his squad after replacing Roy Hodgson.

However, results have not been good enough and Watford, whose owners have never been hesitant when it comes to sacking managers, have lost patience. They hope appointing Bilic, who is expected to install Danilo Butorovic and Dean Racunica as part of his backroom staff, will revive their season.