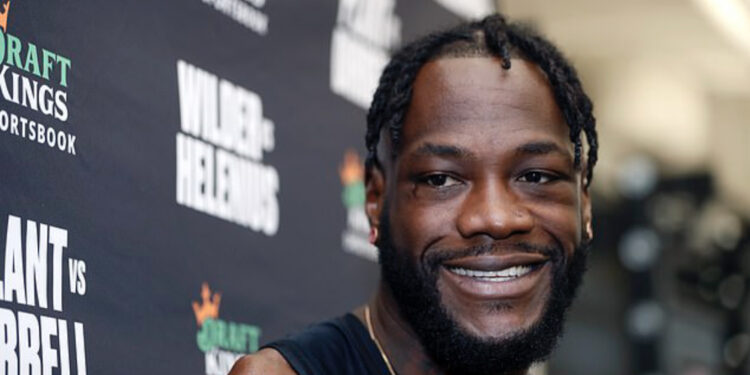 The fuse is lit, the clock ticks down. Three years from now, boxing’s Bronze Bomber will detonate one final time. It promises to be an explosive, gory goodbye.

As his 37th birthday draws near, Deontay Wilder has chosen when he will bow out. Now he must decide how. And with whom. Even after the bombs fall silent, do not expect him to go quietly.

‘Once my boxing career is over, I’m going to devote my time to producing and making music. That’s where my heart is,’ Wilder says.

‘I’m here to make nothing but great fights,’ Wilder says.

First, he must negotiate a way past Helenius, a former sparring partner. They will meet almost a year to the day since Wilder’s trilogy with Tyson Fury came to the boil. Over 11 extraordinary rounds, the heavyweights traded four knockdowns before Wilder fell one final time.

After that second straight loss, the former WBC champion flirted with retirement until the day he was cast into stone. A statue in Alabama changed everything. Now, Wilder says, he is happier than ever. Valuable lessons came from defeat.

From his four-year-old child — who taught him that ‘birds can p*** and poop at the same time!’

From meditation and from ayahuasca, a psychedelic brew used by Amazonian tribes.

‘I’m in a great place in life. In spirit. And in heart, man. I can’t explain it,’ he smiles. Fans might struggle to square this tower of tranquillity with the snarling, spiteful heavyweight whose 42 wins include 41 knockouts.

‘People don’t know me,’ Wilder insists. ‘They see me in the ring and they judge me off that.’

They form a valuable currency.

‘You can be the richest man in the world but if you ain’t happy and at peace, you’re miserable.’

Is that something he realised from his own fall? ‘Not at all. I definitely do meditation. I do ayahuasca. I guess a lot it stems from certain things like that,’ he says. ‘But also dealing with self… you have to be understanding and truthful with yourself. If not, you’ll become someone else that you really don’t like.

‘There’s no guidebook on how we should live life or what we should do. It’s all about what makes you happy and what will bring you peace.’

War and peace will collide when Wilder returns against Helenius, a fighter who has seen all of his traps and tells. The Bronze Bomber will need to adjust.

‘He knows everything as well as I know him. Sometimes that makes great fights,’ he says. ‘Just because we’re friends, I’m not in the business of holding back.’

But how much can he change?

‘I don’t agree that you can’t teach an old dog new tricks,’ Wilder insists. ‘If your mind is not capable of learning any more, you’re just as good as dead.’

Often, the most potent medicines derive from defeat. And Fury gave Wilder a double dose.

‘I learned that I’m an amazing human being,’ explains Wilder. ‘I really have no limits attached to me. There was a lot of things that I don’t think an average fighter would have mentally surpassed.’

That much is true. During the third fight, Wilder showed unthinkable courage and grit.

After the rematch, however, came excuses. His heavy outfit, a spiked drink, Fury’s loaded gloves. Wilder stands by it all.

‘There’s a lot of things that I knew wasn’t right but I still went along with it because I wanted to see how strong I was. How could I endure? What’s my powers? What limits do I have as a human being? I passed the test,’ he says.

With those answers, however, came other uncomfortable truths. Wilder’s boxing journey — born from the need for money to help his daughter, who was diagnosed with spina bifida — has been a remarkable tale of triumph.

But when his ferocious formula malfunctioned — four times Fury rose from the canvas — any sense of infallibility was extinguished.

For a while after that third fight, Wilder turned away from boxing. With motivation lacking, attention turned elsewhere. He spent time with his family. He released a single, Everytime, alongside brother Marsellos. He focused on investment interests.

Wilder said the defeat in the third bout against Tyson Fury, his second to the British fighter in total, wasn’t difficult for him ‘at all’

‘I don’t need the business of boxing any more,’ Wilder claims. ‘It needs me… 98 per cent of fighters don’t have anything to show for it after it’s over. But that won’t be the case for Deontay Wilder… my family is secured whether I’m alive or dead.’

Wilder’s place in Tuscaloosa history is set in stone, too. In May, a statue of the city’s hardest- hitting son was unveiled. The sight of grown men breaking down that day made Wilder relapse. He is addicted to ‘the feeling of being on the edge of death’.

Fury and Joshua are in talks to meet on December 3. ‘I hope they have a good fight and may the best man win,’ Wilder says.

There always has been a jarring chasm between the eloquent, charming Wilder and that bloodthirsty Bomber who takes over come fight night. Boxing will miss both when they’re gone.

‘After it’s all over, I’m going to pursue a lot of other things that I’ve always had passion for,’ Wilder says. Music. Investments.

‘I always like to motivate people… the greatness lies within you, not what other people think and their opinions,’ he says.

‘I thank God for being where I am… I still have love in my heart.’ Soon we will discover how much dynamite is left in those fists.v