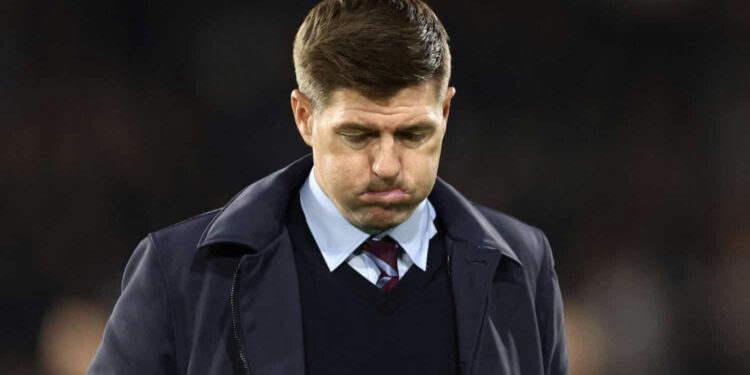 Steven Gerrard was fired 90 minutes after Aston Villa fell to an embarrassing 3-0 defeat by Fulham at Craven Cottage last night.

Villa are out of the bottom three only on goals scored and, with the travelling support repeatedly booing Gerrard, the club decided to take swift action. The 42-year-old has been in the job for less than a year and has been unable to make a success of his first management role in English football. “We would like to thank Steven for his hard work and commitment and wish him well for the future,” a Villa spokesman said.Mitrovic strikes as Fulham beat 10-man Aston Villa to pile pressure on GerrardRead more

It is unclear who will take charge of Villa when they host Brentford on Sunday. They will hope to make a swift appointment and have considered an ambitious move for Mauricio Pochettino. It remains to be seen if the former Tottenham manager, who is out of work after being sacked by Paris Saint-Germain at the end of last season, would be willing to enter a relegation battle.

If Pochettino proves unattainable another option for Villa could be Brentford’s Thomas Frank. However the Bees have made a strong start to the season and have opened talks with Frank over a new deal.

The situation is hugely concerning for Villa, who have spent heavily in recent years. They had high hopes when they replaced Dean Smith with Gerrard last November. The former Liverpool captain was one of the best players of his generation and he impressed in his first management job, leading Rangers to the Scottish title in 2021.

However, he has struggled to win Villa’s fans over. Villa ran out of steam last season, finishing 14th, and have made a poor start to this campaign. There is little pattern to their play and Gerrard has been unable to make the signing of Philippe Coutinho work.

There had been promising signs during Villa’s 2-0 home defeat by Chelsea last Sunday. But Gerrard’s side were abject against Fulham. They were tactically poor and lacked effort. Douglas Luiz was sent off for a foolish headbutt on Aleksandar Mitrovic and Tyrone Mings , who was stripped of the captaincy by Gerrard last summer and dropped at the start of the season, scored a late own-goal.

The announcement from Villa came after Gerrard had conducted his post-match media duties. He had admitted that he was under pressure. “Football is in my DNA, quitting certainly not, so we will see what happens moving forward,” he said. “I have been around the game a long time and I certainly understand the situation.”