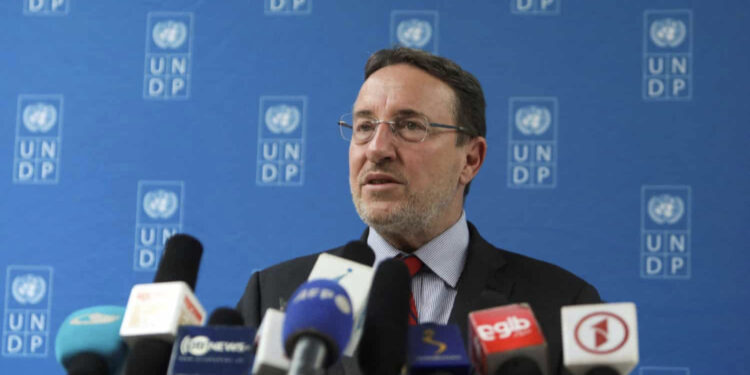 More than 50 of the poorest developing countries are in danger of defaulting on their debt and becoming effectively bankrupt unless the rich world offers urgent assistance, the head of the UN Development Programme has warned.

Inflation, the energy crisis and rising interest rates are creating conditions where an increasing number of countries are in danger of default, with potentially disastrous impacts on their people, according to Achim Steiner, the UN’s global development chief.

“There are currently 54 countries on our list [of those likely to default] and if we have more shocks – interest rates go up further, borrowing becomes more expensive, energy prices, food prices – it becomes almost inevitable that we will see a number of these economies unable to pay,” he said.

“And that creates a catastrophic scenario – look at Sri Lanka [which has descended into civil strife] with all the social and economic and political implications this carries with it.”

Speaking at the Cop27 yUN climate summit, Steiner said any such default would create further problems for solving the climate crisis. “It certainly will not help [climate] action,” he said.

Without measures to help them with debt, he warned, poor countries could not get to grips with the climate crisis.

“The issue of debt has now become such a big problem for so many developing economies that dealing with the debt crisis becomes a precondition for actually accelerating climate action,” he said.

“We need to inject targeted liquidity into countries to be able to invest in energy transitions, and adaptation [to the impacts of extreme weather].”

The climate crisis is further compounding the problem, he warned, as countries are facing increasing effects from extreme weather. Poor countries are not receiving the funding they were promised from the rich world, yet are facing a growing danger of storms, floods, droughts and heatwaves.

Steiner warned that some developing countries were in danger of giving up on the UN climate talks if developed country governments failed to fulfil a longstanding promise to poor nations of $100bn (£86bn) a year in assistance, to help them cut greenhouse gas emissions and adapt to the impacts of extreme weather.

“If Cop27 does not deliver a convergent path on the $100bn, I think many developing countries will leave Sharm el-Sheikh at least thinking about their commitments to the global climate process,” he said. “And I say that very deliberately, because it doesn’t mean they will stop doing things at home, which they are already doing.”

Countries could slow down their efforts, he warned. “Part of accelerating our ability to deal with climate change is premised on having all countries do something. So the highest risk is that we slow down things again, some would say even further.”

But developing countries were already taking their own actions to tackle the climate crisis, he added.

“The developing world already invests multiples of the $100bn to help accelerate the energy transition. The way it looks to a taxpayer in London, or Berlin or Paris, is why are we being asked to pay for everything that happens outside our country in the developing world?

“And that’s simply not true. China, India, countries such as Kenya, South Africa, Ghana, Morocco, Egypt – they’re all investing their own resources in moving towards clean energy transitions. Never mind the extraordinary resources they have to mobilise when a climate-related extreme weather event hits.”

One of the most contentious issues at the Cop27 talks is loss and damage, referring to the most devastating impacts of extreme weather, which countries cannot protect themselves against.

Steiner said the issue was often misunderstood. “It’s building on something that in many of our countries is an established practice. When extraordinary floods take place and the taxpayer essentially steps in, with the government paying house owners the damage that has not been recoverable from insurance companies,” he said.

“We have an established practice that the common purse steps in where a catastrophic event happens. But when a Caribbean island has a third of its GDP wiped out in 12 hours through a hurricane, there’s nobody to turn to.”

That was why a loss and damage fund was needed, he said. “That’s where the injustice of climate change becomes so egregious in the view of many developing countries. Not having been even remotely a principal causal factor [in the climate crisis], they are now paying an extraordinary price through the damage they suffer.”

He predicted that there would be no final settlement at Cop27 of how a funding mechanism for loss and damage could work, but said countries meeting in Egypt, where the talks are now almost at the halfway mark, should be able to make substantial progress.

On Thursday, the theme of discussions at the talks was science, and youth and future generations. Hundreds of youth activists attended to demonstrate their support for climate action, but the protests were muted as the Egyptian government has kept a tight rein on demonstrations outside the talks. Some civil society groups have reported concerns over intimidation and monitoring.

No such restrictions have been placed on lobbying within the halls, however – a coalition of NGOs revealed on Thursday that more than 600 fossil fuel lobbyists were among those attending, a far higher number than in previous years.

Also at the talks, new analysis showed that countries seeking alternative gas suppliers to Russia after its war on Ukraine, had “over-reached”.

European and other governments are now planning new gas infrastructure and supply contracts that would far exceed the amount of gas that countries previously imported from Russia, according to the data from Climate Action Tracker. If all of these contracts were fulfilled, and infrastructure built, temperatures would breach the crucial 1.5C limit, the analysis found.

In rare good news, however, Norway’s oil company has postponed development of the world’s most northerly oilfield exploitation. The Wisting field would be a $10bn project, but has been put on ice for four years.

The company blamed a “cost increase due to increased global inflation” and “uncertainty about the framework conditions for the project”. Campaigners claimed the move as a victory.

Nancy Pelosi, the US House speaker, arrived at Sharm el-Sheikh to fanfare as the Democrats did better than expected in the midterm elections, and warned that some Republicans still regarded the climate crisis as a hoax. US president Joe Biden is expected to join the conference on Friday and make a major intervention.