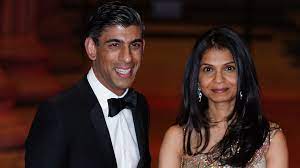 Rishi Sunak was facing questions over his wife’s wealth last night after accounts indicated that she received millions of pounds in dividends from a firm that is still operating in Russia.

Akshata Murthy has a stake worth hundreds of millions in the IT and consultancy business Infosys, founded by her billionaire father.

Major consultancy firms PwC, KPMG and Accenture have all quit Russia after the invasion of Ukraine, citing a desire to protest against the Kremlin’s war. By contrast, Infosys is still operating in Moscow.

Daily Mail analysis has found that over the past year, Infosys made two dividend payments that would have netted Ms Murthy around £11.7million through her 0.93 per cent holding in the company. 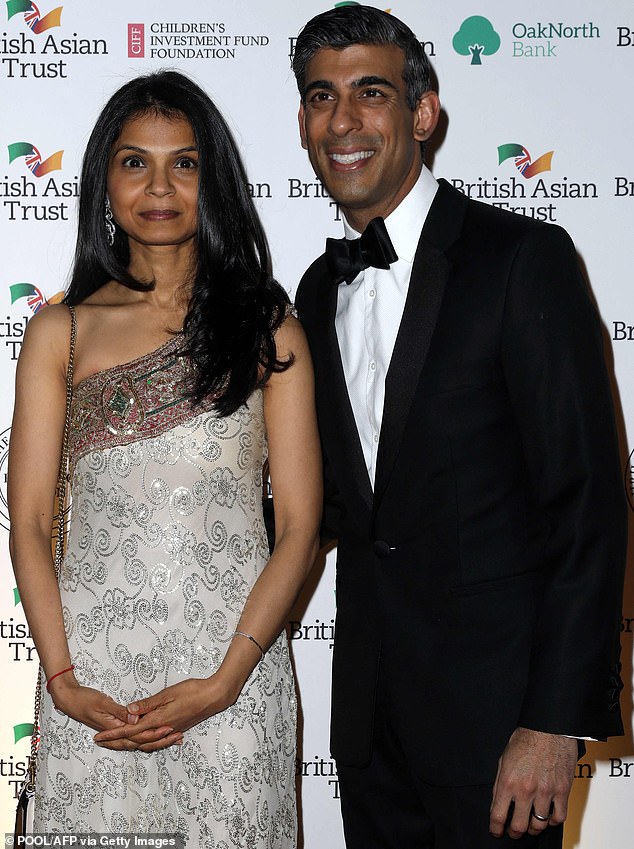 Rishi Sunak was facing questions over his wife’s wealth last night after accounts indicated that she received millions of pounds in dividends from a firm that is still operating in Russia. Akshata Murthy (above, with her husband) has a stake worth hundreds of millions in the IT and consultancy business Infosys, founded by her billionaire father 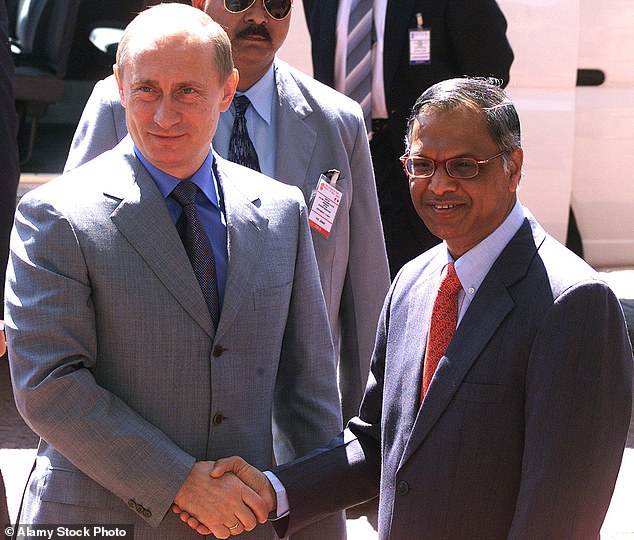 Ms Murthy’s father Narayana, nicknamed the Bill Gates of India, founded Infosys in 1981. The entrepreneur, who was pictured shaking hands with Putin in 2004 (above), is now worth a reported £3.4billion

The dividend can be calculated from Infosys’s most recent financial results, published in the US.

It consists of a payment of 15 Indian rupees per share, equivalent to 15p, announced in April last year, as well as a second payment of 15 rupees unveiled in October. The war in Ukraine began months later.

Ms Murthy, who married Mr Sunak in 2009, is one of the wealthiest women in Britain, with a fortune reportedly even larger than the Queen’s.

Quizzing the Chancellor about his wife’s links to Russia earlier this week, Sky News presenter Jayne Secker asked him: ‘Are you giving advice to others that you are not following in your own home?’

Mr Sunak, who had previously encouraged UK firms to sever ties with Russia to punish Putin, replied: ‘I’m an elected politician and I’m here to talk to you about what I’m responsible for. My wife is not. I don’t think that is the case. As I said, the operations of all companies are up to them.’

The Chancellor now faces more pressure over his wife’s holdings in Infosys, given he has warned businesses to ‘think carefully’ about making any investments that would benefit the Moscow regime.

Liam Byrne MP said: ‘At a time when we have a responsibility to stand with the Ukrainian people as they resist Russian aggression, this is extremely concerning.

Sunak squirms when grilled on his wife’s business links to Russia.

‘Putin’s government needs to be treated like a pariah, not a cash cow.’

The entrepreneur, who was pictured shaking hands with Putin in 2004, is now worth a reported £3.4billion.

He stepped down as chairman of the company in 2014 but retains a 0.4 per cent stake in Infosys worth around £311million.

In addition to his daughter, his wife and son have stakes in the group, too. Infosys remains one of India’s largest tech firms, with a presence in around 50 countries.

However, it has attracted criticism for deciding to keep its Moscow office open despite the invasion of Ukraine.

A spokesman for the firm told the Mail: ‘Infosys has a small team of employees based out of Russia that services some of our global clients locally. We do not have any active business relationships with local Russian enterprises.’

It is not known whether Ms Murthy received the cash indicated from the most recent Infosys accounts, or if the dividends were reinvested or redeployed in another way.

A spokesman for Rishi Sunak said yesterday: ‘Mr Murthy retired from Infosys in October 2014 and has not had any contact with the company since then.

Ms Murthy is one of thousands of minority shareholders in the company.

It is a public company and neither her nor any member of her family have any involvement in the operational decisions of the company.’