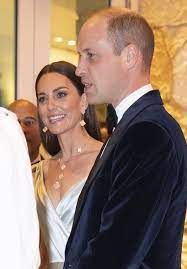 William at 40: A milestone birthday in a life under scrutiny

The Duke of Cambridge has signalled any decision by Jamaica, Belize and the Bahamas to break away from the British monarchy and become republics will be supported with “pride and respect” by the UK.

William has visited the three nations during his Caribbean tour with Kate, and his comments will reverberate around the region where five other countries also have the Queen as the head of state.

Speaking on the penultimate night of the Cambridges’ visit to the Bahamas, the future king told guests, who included the country’s prime minister, Philip Davis, that whatever the future holds, the bonds between the UK and the nations would “endure”.

The duke said: “Next year, I know you are all looking forward to celebrating 50 years of independence – your golden anniversary.

Barbados took the historic move of replacing the Queen as head of state in November, and elected its first president during a ceremony witnessed by the Prince of Wales.

William’s comments are likely to be interpreted as an acknowledgment of forces already in motion, as Jamaica’s prime minister, Andrew Holness, suggested to the couple his country may be the next to become a republic.

He told the Cambridge when he welcomed them to Kingston on Wednesday, that Jamaica was “moving on” and intended to “fulfil our true ambitions and destiny as an independent, developed, prosperous country”.

A few days after the royals left Belize, the country’s government indicated the People’s Constitutional Commission, a new body, would be consulting across the country on the issue of the continuing decolonisation process.

“Perhaps it is time for Belize to take the next step in truly owning our independence. But it is a matter that the people of Belize must decide on.”

… we have a small favour to ask. Millions are turning to the Guardian for open, independent, quality news every day, and readers in 180 countries around the world now support us financially.

We believe everyone deserves access to information that’s grounded in science and truth, and analysis rooted in authority and integrity. That’s why we made a different choice: to keep our reporting open for all readers, regardless of where they live or what they can afford to pay. This means more people can be better informed, united, and inspired to take meaningful action.

In these perilous times, a truth-seeking global news organisation like the Guardian is essential. We have no shareholders or billionaire owner, meaning our journalism is free from commercial and political influence – this makes us different. When it’s never been more important, our independence allows us to fearlessly investigate, challenge and expose those in power.

Meghan Markle and Prince Harry join William and Kate Middleton at the Royal British Legion Festival of Remembrance – along with The Queen, Boris Johnson and hundreds of servicemen and veterans