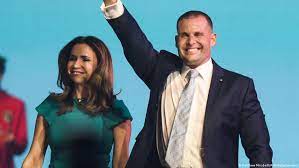 Malta’s Labour party has claimed victory in a general election, securing a third term in government despite a legacy of corruption and after the lowest turnout in decades.

If confirmed, this would be the prime minister Robert Abela’s first electoral mandate after replacing Joseph Muscat, who stood down as prime minister in January 2020 amid a government crisis stemming from the murder of the journalist Daphne Caruana Galizia.

Abela, the son of Malta’s former president George Abela, said in a brief interview to TVM News that Labour had won a majority, prompting celebrations among party supporters in the counting hall in Naxxar.

Bernard Grech, the leader of the Nationalist party (PN), congratulated Abela, and the deputy prime minister, Chris Fearne, said Labour’s victory was “sound”, although official results are not expected until the early hours of Monday, the Times of Malta reported.

“We are very satisfied that for the next five years Malta will again have a Labour government,” Fearne told AFP at the count, saying all the signs were of an absolute majority for his party.

Several opinion polls had pointed to an inevitable win for Labour, mainly off the back of a strong economy and the government’s handling of the coronavirus pandemic.

However, turnout was 85.5%, the lowest since 1955, according to the Electoral Commission, and the campaign was overshadowed by Russia’s invasion of Ukraine. This was the first general election in which 16- and 17-year-olds were eligible to vote.

Abela, a lawyer, was largely unaffected by repeated allegations of corruption made against him by Grech, even if Labour remains tainted by the corruption within Malta’s political and business elite exposed by Caruana Galizia, who was killed by a bomb planted beneath the driver’s seat of her rental car as she drove away from her home in the village of Bidnija in October 2017.

A public inquiry last year found that the state under Muscat created a “culture of impunity” in which her enemies felt they could silence her.

Yorgen Fenech, a wealthy businessman, is awaiting trial for allegedly masterminding the murder. Caruana Galizia, 53, had been investigating a controversial power station deal in which Fenech was the main shareholder and director. Muscat quit amid public protests over him allegedly trying to shield those within his inner circle from the investigation into the murder.

As prime minister, Abela has moved to strengthen good governance and press freedom, although Caruana Galizia’s family say he has not gone far enough.