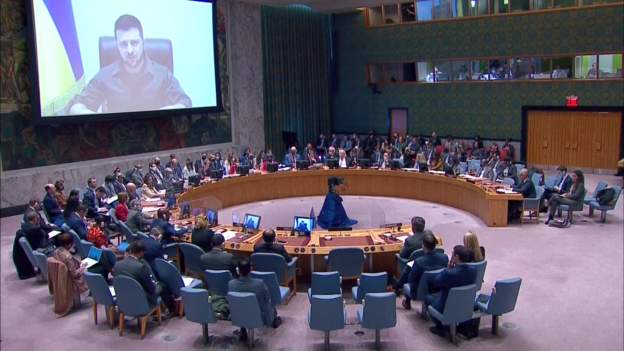 President Zelensky goes on to demand that Russia faces “accountability”, saying it should be brought before an international tribunal similar to that held at Nuremberg after World War Two.

The “massacre” in Bucha is only one example of many of what Russia has been doing in past 41 days, Zelensky says.

The world is yet to learn the full truth, he adds, with Russia’s military openly looting villages they have captured.

He calls on the council to throw Russia out as a member of the Security Council.

He says if the council cannot find a way to help stop Russia’s actions in Ukraine it should “dissolve”, because it proves “there is nothing that you can do besides conversation”.

He finishes his speech to applause and asks the audience to watch a video next – although technical difficulties mean we’re hearing from a few council members before that happens.

Russia should not be on UN Human Rights Council, says US