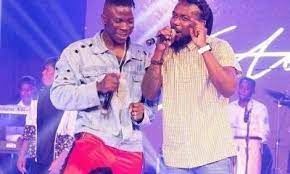 Musicians Stonebwoy and Samini on Saturday dawn offered live-band performances that will live long in the memory of many who thronged the Rock City, located at Nkwatia on the Agogo-Mpraeso road, as part of the Kwahu Easter festivities.

It is not often live band concerts are held in nightclubs but the two acts and their hosts ensured that the event was a massive success.

Some patrons were still making their way into the venue when Stonebwoy and his retinue made their way onto an elevated stage inside the nightclub shortly after 1.30 am.

Those who were expectant of friction between the pair when the concert was announced were left disappointed as they set aside their rivalry and let their hit songs do the talking.

From the get-go, the BHIM Nation boss and his band set the tone for the night with his energy which saw him strip off his jacket minutes into his performance.

For an hour, Stonebwoy, 34, had the audience dancing along and singing to songs from his catalogue during his set.

Reeling from hits such as the crowd-pleaser Run Go, 1Gad, Tuff Seed, Activate and People Dey, the crowd appeared to expended all their energies by the time he got off the stage at 2.30am.

However, they would soon find their second wind when Stonebwoy’s former mentor Samini clad in a green silk outfit and white sneakers made his entry with his own band and no backup singers.

Samini’s mastery of crowd control and freestyling came to the fore during his set as he performed songs from his extensive catalogue for about fifty minutes.

For what he gave in energy levels to deliver his own backing vocals, the 40-year-old reggae-dancehall singer more than made up for with his audience engagement and crowd control.

Perhaps, the highlight of his set came mid-way through his performance when he performed a freestyle tribute about the Coronavirus pandemic which led to the two-year break in the Kwahu Easter celebration and the venue of the event.

The pair laid down a marker for Amakye Dede and Kofi Kinaata who are scheduled to take their turn today at the same venue.