Russia are targeting critical Ukrainian infrastructure after suffering losses in a counter offensive.

Missiles hit a dam in president Volodymyr Zelenskyy’s hometown Kryvyi Rih, 93 miles south-west of Dnipro, in a supposed attempt to flood the city.

Germany to relax visa rules for Critics of Russian Government

Videos showed elevated water levels on the Inhulets river and flooding on the streets, forcing some residents to evacuate.

Meanwhile, Zelenskyy was involved in a car accident on a rare trip out of the capital Kyiv to witness the Ukrainian flag being raised in the recaptured city of Izium.

On his way back from the front a car collided with one carrying the president but he was not seriously hurt, according to a spokesperson.

It had been a momentous event in Izium, highlighting Russia’s retreat after they left the city last week as Ukraine regained large swathes of territory in the north-eastern Kharkiv region.

Zelenskyy sang the national anthem, with his hand on his heart, as the flag flew outside the burned-out city hall following six months of Russian occupation that has left many buildings destroyed in Izium.

“The view is very shocking, but it is not shocking for me,” Zelenskyy said, “because we began to see the same pictures from Bucha, from the first de-occupied territories the same destroyed buildings, killed people.” 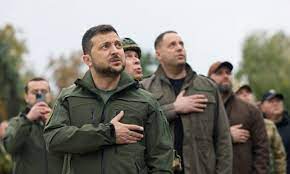 In addition to territory, Ukraine have seized some of Russia’s weaponry during their counter-offensive.

The Center for Defense Strategies said one unit left behind more than three dozen T-80 tanks and as many infantry fighting vehicles. Another unit left 47 tanks and 27 armoured vehicles, it said.US president Joe Biden says Ukrainian forces have made “significant progress” recently but added, “I think it’s going to be a long haul.”

Despite criticism of the invasion seemingly increasing in Russia, German Chancellor Olaf Scholz said after a phone call with Vladimir Putin, “Unfortunately, I cannot tell you that the realisation has grown over there by now that this was a mistake to start this war.”