Rishi Sunak has said it is “morally right” that Britain honours its climate change commitments in his speech at Cop27, but he made no mention of paying reparations after Boris Johnson said the country cannot afford to do so.

The prime minister made a very short appearance on the world stage on Monday, after making a very public U-turn on his attendance in Egypt – the same reversal that may have left him living in Johnson’s shadow, as he was forced to speak hours after his rival.

Sunak paid homage to Queen Elizabeth II in his address, who last year told the Cop26 summit in Glasgow that there was “always room for hope”. Echoing her words, he said: “I believe we found room for hope in Glasgow. With one last chance to create a plan that would limit global temperature rises to 1.5 degrees, we made the promises to keep that goal within reach.”

He said he believed the conference could deliver on the promises, and announced the UK was tripling its funding to help nations adapt to the impacts of climate change.

But he was unable to spell out how developed countries, who in his words had been “unfairly burdened with the carbon debt of richer nations” were going to be supported.

British negotiators had backed a last-minute agreement to address reparations to countries suffering the worst impacts of climate change, with Pakistan leading the push for such a commitment, according to reports.

Sunak referenced the devastating floods in Pakistan but failed to commit to action. “I know that for many, finances are tough right now,” he said in Sharm el-Sheikh. “The pandemic all but broke the global economy and before coming here today, I spent last week working on the difficult decisions needed to ensure confidence and economic stability in my own country.

“But I can tell you today that the United Kingdom is delivering on our commitment of £11.6bn.”

Hours before Sunak spoke, Johnson told a fringe event at the summit that Britain had pumped an “awful lot of carbon into the atmosphere” but “what we cannot do is, you know, make up for that with some kind of reparations. We simply do not have the financial resources – and no country could.”

Desperate to keep his stamp on Britain’s climate commitments, Johnson said: “The best way to fix this is not to look backwards and to try to tot up some bill for loss and damage that the UK or other countries have done, but to try to look at what the UK can do to help take countries forward and help them achieve the carbon reductions and green technologies [they need].”

Labour described Sunak’s speech as “vacuous and empty”, which showed he “did not want to be there … [and] that he has no real ambition to tackle the climate and energy crisis”.

Ed Miliband, the shadow climate change and net zero secretary, said: “Rishi Sunak is a fossil fuel prime minister in a renewable age. This is the man who had to be dragged kicking and screaming even to go to Cop27, and who opposes plans to make Britain a clean energy superpower.”

Johnson also criticised Liz Truss’s failed attempts to revive fracking in the UK. Truss planned to lift the ban on fracking in England that Johnson had approved in November 2019. Sunak said last month he would keep the ban.

“People have drawn the conclusion that the whole project of net zero needs to be delayed, mothballed, and put on ice, and, for instance, we need to reopen coal-fired power stations and frack the hell out of the British countryside,” Johnson said.

“I believe here at Sharm is a moment when we really have to tackle this nonsense head on. This is not the moment to abandon the campaign for net zero.” 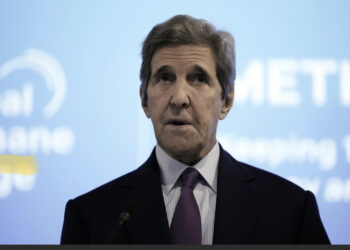