Gianni Infantino responds to criticism of the World Cup, saying, “I feel like a migratory worker.” In an 57-minute diatribe which frequently drew gasps of astonishment, said that European nations should apologise for acts committed in their own histories, rather than focussing on migrant workers’ issues in Qatar.

And he insisted that the country had reformed beyond all recognition since winning the right to host the World Cup.

The Swiss-born Infantino then compared his struggles as a child growing up as a child of migrant workers with red hair and freckles as helping him understand what ordinary Qataris were going through.

“Of course I am not Qatari, I am not an Arab, I am not African, I am not gay, I am not disabled,” he added. “But I feel like it, because I know what it means to be discriminated [against], to be bullied, as a foreigner in a foreign country. As a child I was bullied – because I had red hair and freckles, plus I was Italian, so imagine.”

Later it was pointed out that he had missed out half the world’s population. “I feel like a woman too!” he added.

Last year the Guardian reported that at least 6,500 migrant workers have died in Qatar since preparations for the World Cup began. Infantino insisted, however, that Fifa had been a guiding light in helping Qatar improve the situation for migrant workers by scrapping the kafala system, introducing a minimum wage and heat protections – before accusing the west of being hypocritical.

“We have been told many, many lessons from some Europeans, from the western world,” he said. “I think for what we Europeans have been doing the last 3,000 years we should be apologising for the next 3,000 years before starting to give moral lessons to people.”

Infantino pointed out that 25,000 migrants had died trying to get into Europe since 2014, before drawing a comparison with how migrant workers are treated by Qatar.

“Hundreds of thousands of workers come and earn, they earn 10 times more than in their own countries, and they help their families survive,” he said. “And they do it in a legal way. We in Europe close our borders and we don’t practically allow many workers from these countries to work legally.”

“If Europe would really care about the destiny of these young people, Europe could do as Qatar did, create some legal channels, where at least a number, a percentage of these workers could come,” he added. “This moral lesson, one-sided, it is just hypocrisy. I wonder why nobody recognises the progress that has been made since 2016?”

Infantino also insisted that LGBTQ+ rights would be protected in Qatar during the World Cup. “They have confirmed and I can confirm that everyone is welcome. If you have a person here and there who says the opposite, it’s not the opinion of the country, it’s certainly not the opinion of Fifa,’ he said.

“Like the workers, these are processes,” he added. “You want to stay at home and say how bad they are, these Arabs, these Muslims, because it’s not allowed to be publicly gay. I believe it should be allowed. But it is a process.”

If someone thinks that hammering and criticising something will achieve something, well I can tell you it will be exactly the opposite because the action will be to close more doors.”

Infantino also accused journalists who questioned whether England supporters from India here in Qatar were ‘fake fans’ of racism. “Can someone who looks maybe like an Indian not cheer for England, or for Spain or Germany?” he asked. “You know what this is? This is racism. This is pure racism. And we can stop that.”

Infantino also made light of the late decision to ban alcohol from stadiums just 48 hours before the tournament kicks off. “If this is the biggest issue we have for the World Cup then I will resign immediately and go to the beach to relax,” he said.

“Let me first assure you that every decision taken at this World Cup is a joint decision between Qatar and Fifa. There will be many fan zones where you can buy alcohol in Qatar and fans can simultaneously drink alcohol. I think if for three hours a day you cannot drink a beer, you will survive.

“The same rules apply in France, Spain, Portugal and Scotland,” he continued. “Here it has become a big thing, because it is a Muslim country? I don’t know why. We tried and that is why I give you the late change of policy. We tried to see if it was possible.”

“Do we want to continue to spit on the others because they look different, or they feel different?” he added. “We defend human rights. We do it our way. We obtain results. We got women fans in Iran. The Women’s League was created in Sudan. Let’s celebrate. Don’t divide.”

The media conference ended with the Fifa director of media relations, Bryan Swanson, addressing the room. Swanson, a former Sky Sports reporter said: “I am sitting here as a gay man in Qatar. We have received assurances that everyone will be welcome and I believe everyone will be.

“Just because he [Infantino] is not gay, does not mean he does not care. He does. You see the public side and I see the private side. I have thought long and hard about whether I should say this. I do feel strongly about it.

We care about everyone at Fifa. I have a number of gay colleagues. I am fully aware of the debate and fully respect people’s opinions. When he says we are inclusive, he means it.” 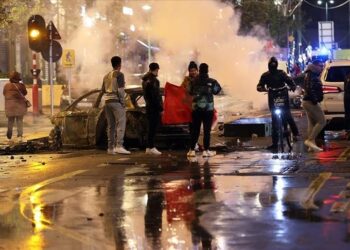 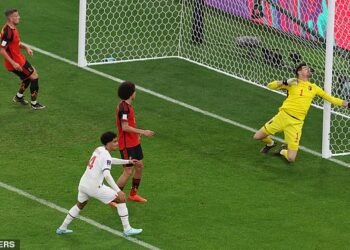